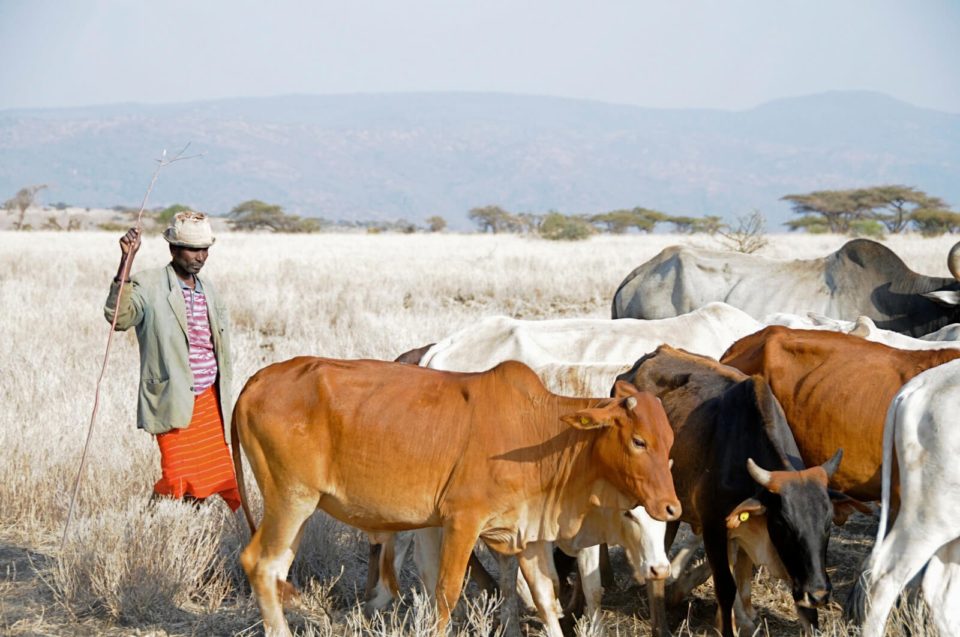 Turkana County is predominantly a pastoral region where many people depend on livestock for their livelihoods.

But according to Kidirio Etan Esinyen, a herder in Namon village, Turkana West sub-county, lack of awareness on common livestock diseases and overreliance on traditional treatments has led to farmers losing animals, especially during droughts.

Mr Kelai lost more than 100 animals to contagious pleuropneumonia (CPP) disease in 2015. He said this could have been avoided if he had access to livestock health services.

The deaths came after he had recovered from a severe drought in 2008 that killed all his livestock.

“We are frequently being trained on how to detect diseases. I pass on the knowledge I acquire to my fellow herders and children so that if an animal is sick I get a reliable report,” he said.

Organised community disease reporters have forms for reporting the health status of livestock in the village. They fill out and submit them every month.

“When all livestock are healthy in this village I rejoice. I don’t want to see any livestock die of a disease that I can easily recognise and alert vets about in time for immediate intervention,” Mr Kelai said.

He said he had successfully reported naosin and PPR and alerted vets, who took blood samples for screening and later vaccinated the livestock.

“The problem we had in the past was that when there was a livestock disease outbreak, herders would individually try to rush to ensure their livestock were treated. That is how we have lost many animals in this village,” Mr Esinyen explained.

He said the situation has changed after they received training on how to detect livestock diseases through observing various signs on the bodies of their animals.

Some of the signs he looks out for are coughing, sneezing and eye and mucus discharges.

In addition, he said whenever a sick animal dies, he checks the intestinal tract for any diseases acquired during feeding, a change on hooves and skin, or livestock unable to walk like others.

He then links up with a veterinarian through local administrators and county government officials.

Turkana County Pastoral Economy executive Philip Aemun said that through the use of smartphones they have established an innovative community-led livestock disease surveillance, where disease reporters in villages collect and transmit data to vets.

Mr Aemun said the county government, through a partnership with USAid’s Feed the Future and the International Livestock Research Institute, handed over smartphones to community disease reporters.

“Through the e-surveillance system we are currently conducting targeted vaccination of livestock against peste des petits ruminants in Turkana East as well as treatment of camels against hemorrhagic septicemia,” he said.

He said based on the information from the ground, they frequently conduct vaccination campaigns aimed at preventing the spread of the disease to other parts of the county and cushion herders from losses.

“Community disease reporters (CDRs) play a major role in continuous reporting of livestock disease status across our vast county. Their regular reporting helps in monitoring and early detection of disease outbreaks for an evidence-based response,” he said.

The Directorate of Veterinary Services last week partnered with the Agency for Pastoralists Development to train CDRs on major clinical signs of livestock diseases for better surveillance and reporting.

In Kaikor village, among villages with large concentrations of livestock near the Kenyan border with Ethiopia and South Sudan, Peter Lochampa, a local administrator, said their main challenge has remained access to water and pasture.

And as drought persists, they must move further towards the border, with some even crossing into neighbouring countries.

Besides courageously looking after livestock in such an insecure environment where many people hold illegal firearms, they sometimes share grazing fields and water points with their counterparts.

“Our worry has been the frequent transmission and spread of contagious diseases when the livestock are not vaccinated before migration,” Mr Lochampa said.

“But with CDRs, we are assured of a free flow of accurate information about the health of our livestock to veterinary officers.”

He urged the county government and partners to conduct awareness programmes across the county to educate pastoralists on the need to ensure they take their livestock for mass vaccinations.

He noted that a poor road network in the region may be a major hindrance for vets in remote grazing fields and water points when a disease breaks out.