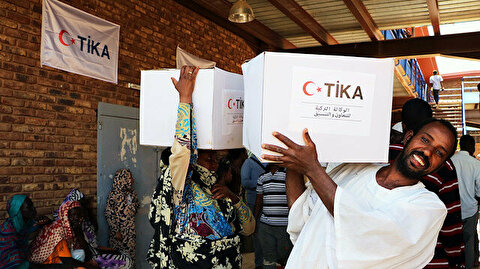 500 kilos of corn, beans, sorghum, peanuts, and sesame seeds were given to farmers who are members of the South Sudan General Farmers Union, in addition to 25 kilograms of tomatoes, onions, okra and corchorus seeds, and one ax, rake, hoe, machete and sickle. Seeds and agricultural equipment were distributed in Gumbo, Hai-Referendum and Kabo, where poor people live in the rural parts of Juba.

In his speech at the ceremony, Ambassador Mutaf said that there is a relationship between these two countries that goes back a long way. He also added that Turkey is one of the first countries to recognize the independence of South Sudan. Stating that TİKA hasn’t provided the seed and agricultural equipment support for the first time; it has been done regularly for four years, the Ambassador stated that Turkey will continue to support the development of South Sudan as much as it can.

Osman Anei Anei, President of the South Sudan General Farmers Union, stated in his speech that the seeds and agricultural equipment donated will economically help the farmers and their families living in Gumbo, Hai-Referendum and Kabo regions. Stating that the starting date of the project, which is the rainy season, is appropriate, and that the farmers will both support their families and make money by selling the surplus products, Anei also underlined that the project will be continuous with the new seeds to be obtained from the harvest.

The project ended with the distribution of seeds to the farmers in Kabo.