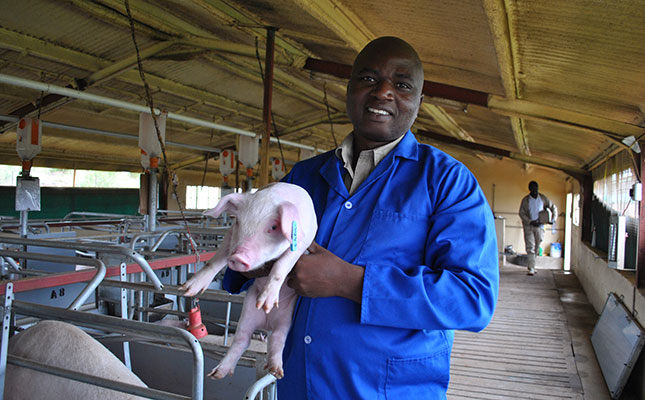 Buti Malinga, together with his sister, Cathy, started Vukani Piggery in 2008 with nine sows after they acquired the 154ha farm, Bronkhorstfontein, near Vanderbijlpark through the state’s land reform programme.

The pair had, in fact, grown up on the same farm.

Today, thanks to their hard work and persistence, as well as assistance from government, Vukani Piggery is well on its way to becoming a fully fledged commercial piggery.

In order to do this, the pair already run the small-scale operation using commercial practices. They currently have 75 sows, but have capacity for 100.

“We have a plan to expand the operation to 97 sows. After this, we want to apply for a loan through the Land Bank,” Malinga explains.

But he has aspirations for far greater things; he hopes to one day expand the farm’s infrastructure to accommodate 500 sows.

Land reform farm
Malinga received the farm in 2008 through the then Department of Agriculture’s land reform programme. While he admits that he had no desire to farm as a child, he developed a great enthusiasm for it later on in life.

Even so, he never dreamt that he would one day have access to a farm.

“When we received the farm, it wasn’t as easy as we thought it would be. We weren’t able to just jump into farming; the starting costs were very high. It took a few years to receive the funding, and we started the farming operation itself in 2017.”

Other government programmes, such as the Comprehensive Agriculture Support Programme, provided Malinga with additional funding.

Some of this was used to demolish the existing piggery structures on the farm and build the current 100-sow unit, which includes breeding, farrowing and weaning houses.

When he first started farming, Malinga had to sell his weaners to improve cash flow. As a result, he was at first unable to expand his operation. In addition, he faced his first major challenges: the listeriosis and foot-and-mouth disease (FMD) outbreaks.

“It hasn’t been an easy road; listeriosis and FMD had a serious impact on the [pork industry]. Many emerging farmers received a much lower price for their produce,” he recalls.

In addition to that, he has faced the usual challenges of high input costs and cash flow difficulties. His current herd size of 75, for example, is somewhat smaller than before.

“We had 89 sows, but due to various reasons, we had to cull some of them.”

Malinga explains that, as with other farmers, price changes affect the cash flow of his operation. Not only do feed prices increase, but other inputs and services, such as veterinary services, also go up. Creep and grower feed have become particularly expensive.

Despite these high costs, he has continued to buy the best feed available as part of his efforts to deliver the best-quality pork.

Breeding
Malinga uses only AI on his sows, but keeps two boars to aid stimulation. There are about 650 pigs, including boars, sows, weaners and piglets, on the farm at any one time.

He breeds Large Whites and Landrace pigs, as they “produce a lot of meat, and are very hardy and suited to our farming conditions”.

Malinga prefers to use AI, instead of having to raise and maintain numerous boars. He divides the year into 15 cycles, which include AI, farrowing and weaning periods.

These periods are repeated throughout the year. The breeding cycle is 114 to 116 days.

The sows usually deliver a litter of at least 12 live piglets per cycle, and sows and piglets are kept in the farrowing house until weaning.

The sows are given Farrowsure, a medication to enhance their immune response, for 18 days. All piglets receive ear-tattoos for record-keeping purposes.

After weaning at 28 days, the sows are stimulated to go back
on heat, and are flushed (provided with extra feed) to assist with this. They receive around 4kg of feed per feeding session and a glucose supplement during this period. Once the sows are on heat, they are artificially inseminated.

Malinga sources genetics from PIC in Middelburg, which
assists him with technical aspects of breeding. He also receives advice on pig production from the South African Pork Producers’ Organisation (SAPPO), of which he is a member.

In addition, SAPPO supports Malinga by paying a portion of his veterinary bills. The amount is worked out on a sliding scale, which is adjusted as his operation grows and improves.

Some of the greatest challenges he has faced have been in the selection of genetics. In the beginning, he kept using the same genetics, and failed to select correctly.

“The genetics should produce [pigs that deliver] sufficient
milk, farrow a high number of live piglets, and have strong back feet. These are the features we want to see in breeding sows,” he says.

The average weaning weight of Vukani pigs is between 8kg and 10kg, and they are sold at a live weight of between 70kg and 100kg.

Biosecurity
Malinga implements a strict biosecurity programme, which he says is crucial to the success of the piggery.

The pig houses are fenced off in an enclosure, and every person who enters and exits the enclosure must dip his or her shoes in a solution of GPC8, a powerful disinfectant, and thereafter don a pair of gumboots and a jacket.

In addition, each pig house has its own foot bath to prevent cross-contamination between the houses, and hence the spread of disease. The houses are cleaned daily.

When moving between pens in the same house, visitors or workers must step in the foot bath again. Malinga is particularly proud of his biosecurity programme.

“No one is allowed access to the piggery without a valid reason, and the less foot traffic in the houses, the better,” he says.

He also implements a strict disease and pest management programme. He vaccinates against porcine parvovirus, E. coli, coccidiosis and mycoplasma, and deworms the boars every six months and the sows after every cycle.

To improve his operation, he uses a computerised pig management system that draws up reports of the trends on his farm, such as mortality, fertility and farrowing rates.

The software analyses the efficacy of the operation, which assists him with performance testing.

He also uses the system to track the performance of each sow, and uses reports from previous years to compare the weaning weights and birthweights of the various litters.

Delivery to the market
Vukani Piggery supplies Dreamland Piggery, and is in the process of finalising arrangements to supply Lynca Meats once the piggery increases its capacity.

“The problem is that because the operation is small, I can’t always meet the demands of the abattoirs,” he admits.

Malinga delivers between 60 and 80 pigs a week, and initially found the logistics of this problematic.

“In the beginning, I used to make several trips with a trailer
to deliver the pigs. Later, I realised it would make more sense to contract a truck to collect the pigs and take them to the abattoir for me.”

The future
As mentioned, he is keen to ultimately expand his 75-sow unit to 500 sows. He also wants to start a small crop enterprise, growing lettuce, tomatoes, cucumber, spinach and cauliflower, on 5ha under irrigation.

While he runs 10 sheep and 30 cattle in addition to his pig operation, his main focus is on expanding the piggery.

“My mission is to contribute to food security, provide the best possible quality animals, and create employment,” he says.

He adds that the best decisions he has made so far are implementing biosecurity and never compromising on feed.

Malinga was named the winner of the National Carcass Competition in the Emerging Farmer Category for Pork in 2018, and one of the winners of the Best Group of Five Baconers in 2018.