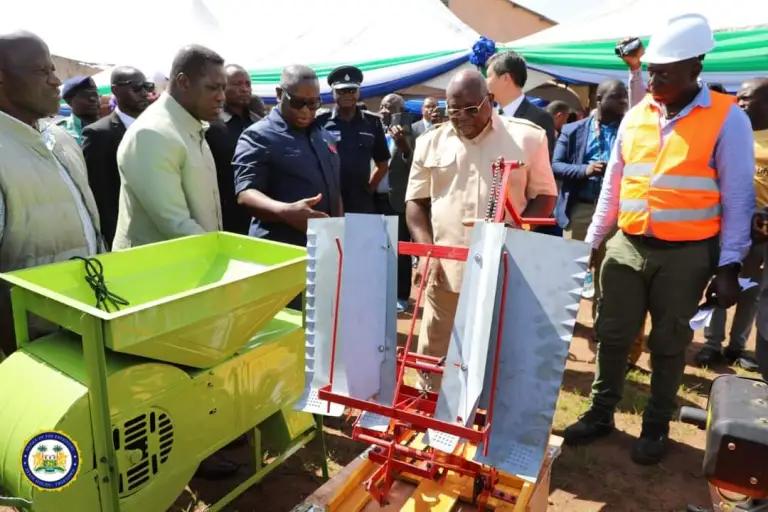 The President noted that the machines, donated through the generosity of the People’s Republic of China, were a huge structural complement to the machine rings, disclosing that: “The machines and tools that we are taking delivery of will be deployed in Farm Services Centres. These will be located at strategic centres that will serve farmers around rice-producing centres.

“One Farm Service Centre will be located at Gberay Junction in Port Loko District to serve farmers around 100,000 hectares of the rice bowl of Kambia, Port Loko, Tonkolili, Falaba and Koinadugu Districts in the northern region. Another will be located in Bo to serve 160,000 hectares of arable rice-producing areas of Bo, Bonthe, Pujehun, Moyamba and Tonkolili District,” he said.

President Bio also emphasised that each Farm Service Centre would hold machines, equipment and tools as well as training facility, mechanical workshop, and a storage and administrative block, adding that they would also serve as aggregation centres for seeds, agrochemicals, and fertilisers with resident experts and extension workers.

“So, the idea is for farmers to interact with experts and acquire modern farming techniques, hire machines at least cost, and acquire managerial skills. But more critical is the skills transfer component that will be available on demand to farmers. I expect that it will cover land development and preparation, planting, fertiliser and chemical application, harvesting, processing, repair and maintenance.

The idea is for farmers to interact with experts and acquire modern farming techniques, hire machines at least cost, and acquire managerial skills

“It has, therefore, been my vision that as part of our transformation of the agriculture ecosystem, we must introduce large-scale mechanisation closer to farm sites and make them accessible and affordable for rural farmers eager to expand their small holdings and to support the private sector determined to commercialise their production scales.

“We are… most grateful that a nation that has acquired rice self-sufficiency associates with our progressive vision by seeding the essential infrastructure of machines,” he concluded.

Minister of Agriculture, Abubakarr Karim, said with the donation of machinery, other resources and technical expertise from the Government and people of China, they were reinforcing mechanisation, one of the main foundations for lasting change in the agriculture sector.

“These donations and support system will strongly contribute to loosening Sierra Leone’s over-dependence on rudimentary forms of agriculture, which, almost without exception, permanently keep our farmers in the poverty trap of subsistence agriculture.

The Minister noted that with funds from Government, they had been able to support the private sector with more than 400 agricultural machines and implements to provide machinery services to farmers in all fifteen agricultural districts of the country, through the Machine Rings System.

“I am happy to report that this is the second year of that agriculture safety net support, which, alongside the provision of quality inputs and agro-chemicals, is channelled through the private sector-led e-Voucher platform. Those combined policy and performative actions have had significant results on intensive rice production at the community level,” he said.

On behalf of the Government of the People’s Republic of China, Chargé d’affaires at the Chinese Embassy in Freetown, Li Xiaoyong, said his government had worked closely with the people and Government of Sierra Leone, particularly in the agriculture and food sector to promote sustainable agricultural systems.

“China stands ready to support food security in Sierra Leone and around the world. The Chinese support of machinery is another help for the modernisation of agriculture in the country. The farming machinery will also help farmers increase their agricultural produce,” he said.