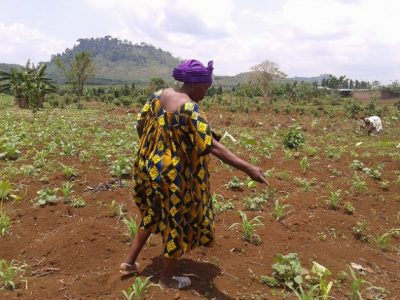 The Peasant Farmers Association of Ghana, a mother organization for peasant farmers in Ghana, has appealed to the government to as a matter of urgency reverse the benchmark value discount policy placed on importation of goods into the country.

According to the association, the policy which gives 50 percent discount to businesses importing goods into the country has serious consequences on the survival of the local industries, especially rice production.

In November 2021, the president Nana Addo Dankwa Akufu-Addo directed the institutions in charge of the implementation of the benchmark policy to reverse it after several organizations including the Ghana Union of Traders Association(GUTA) and other members kicked against it.

However, on January 13, 2022, the Ghana Revenue Authority(GRA) issued a communique citing a directive from the office of the President for the indefinite suspension of the implementation of the reversal of the policy.

According to the associations, the policy when implemented would not only give room for influx of foreign goods in the Ghanaian market, but would collapse indigenous businesses in the country.

Dr. Charles Kwowe Nyaaba, the Executive Director for the Peasant Farmers Association of Ghana who addressed the press said “The purpose of our gathering this morning is to express our disappointment in the government’s decision indefinitely suspend the implementation of the reversal of the benchmark value discount policy. This decision has serious consequences on the survival of the local rice industry and we appeal to the general public to join our call on the government to urgently reconsider this decision”

He said the desires of government to raise adequate revenue to support the development of the country could be achieved by the reversal of the benchmark policy as businesses that are engaged in importation would pay import duties at the various ports.

He also said the reversal of the policy would increase the competitiveness of the Ghana’s rice industry, create jobs and positions the farmers and the Millers to be able to participate in the African Continental Free Trade Agreement (AfCFTA) through rice exportation.

Dr. Nyaaba noted that the farmers were already over burdened with high cost of production, limited access to market, low yield due to their inability to procure inputs and high cost of equipment and other mechanization services.

Moreover, he said the cost of imported rice in Ghana was about 25 percent cheaper than the locally produced rice due to the 50 percent benchmark policy importers are enjoying, thereby threatening the existence of local industries.

“While the benchmark value discount policy keep imported rice prices below local production cost of rice in Ghana, the home grown rice will continue to be uncompetitive thus, threatening sustainability of thousands of rice farmers across the country and the job of thousands of person engaged in the rice value chain” he said

Dr. Nyaaba stated furthermore that Ghana currently needs about one million metric tons of milled rice to help make the country self sufficient in rice production, but added that such dream was a mirage if imported goods continue to be cheaper than the locally produced ones, and therefore appealed to the government to relook at its decision on the policy.

“Rice Millers Association of Ghana, the Peasant Farmers Association of Ghana and the general Agricultural Workers Union, call on the government to implement its decision regarding the review of the benchmark value discount policy, particularly for agricultural produce that Ghana has sufficient capacity in, especially rice, to save the thousands of jobs that remain under threat of collapse in the rice sector” he stated.

The benchmark value, which is the amount taxable on imports, was reduced by 50 percent for some goods.

The import value for cars was also reduced by 30 percent under the policy.

The government’s aims for the policy was that easing the import regime would make Ghana’s ports competitive by increasing the volume of transactions and increasing revenue generated at the ports.

They argued that imports that compete with locally manufactured products must be exempted from the policy as part of a cushion for local products.

Meanwhile, the Ghana Union of Traders Associations (GUTA), had earlier called on its members to oppose the development