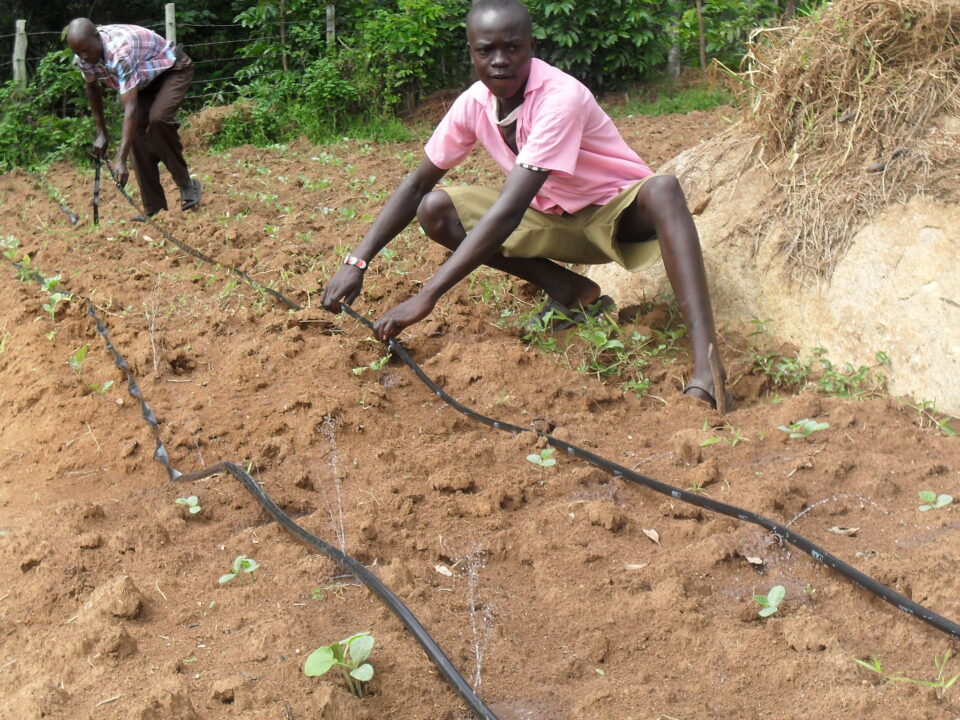 As Africa faces the threat of climate change, and as population growth increases demand for food, smallholder farmers, who form the bulk of the continent’s food producers, are turning to innovative irrigation systems to secure year-round food production.

A cocktail of unpredictable weather patterns that disrupt the planting and harvesting seasons and create unstable agriculture value chains, a burgeoning population (estimated to reach 2.4 billion by 2050) and dwindling arable land is putting a heavy strain on Africa’s food systems.

This has had an adverse impact on the economic growth of numerous countries in Africa, where up to 70 percent of the population relies on agriculture and where the sector contributes an estimated 23 percent to the continent’s GDP.

The situation is exacerbated by the fact that a bulk of food producers in Africa, up to33 million farmers who produce 70 percent of the food, are smallholder farmers who have traditionally relied on rain-fed agriculture for their production.

Reduced agricultural output has seen Africa rely on imports -with its food import bill currently standing at USD $35 billion and poised to reach $110 billion as the continent imports up to 85 percent of its food.

But in the face of such threats, irrigation is proving to be a silver bullet by increasing yields, improving resilience to climate shocks among smallholder farmers and being an engine of agricultural transformation.

In a 2018 report dubbed Water-Wise: Smart Irrigation Strategies for Africa, The Malabo Montpellier Panel, a group of agriculture experts that guides policy choices and offers high quality research to decision makers, argues that the expansion of agriculture could assist farmers double food production and insulate themselves from erratic weather patterns.

However, despite the many promises that irrigation holds, only 6 percent of the total cultivated land in Africa is irrigated compared to 37 percent in Asia and 14 percent in Latin America.

“Irrigation investments need to accelerate in Africa,” the 2018 report further notes. “By meeting the need for expanded agricultural production, and by drawing on strengthened capacities as well as promising technologies that facilitate decentralized water-saving approaches, these investments will be attractive to farmers, businesses, and governments.”

African countries that have invested their irrigation have been able to shield their farmers and population from hunger while reducing dependence on imports.

Niger, a West African nation where 80 percent of the population relies on agriculture for livelihood, has tapped into irrigation innovations mostly driven by smallholder food producers who receive backing from both the government and  the private sector. As a result, the country ranks among those with the fastest pace of irrigation expansion, with 20 percent of its agriculture GDP coming from irrigated agriculture.

This has boosted yields and incomes of small-scale food producers while guaranteeing year-round food production.

Zimbabwe, long suffering from international sanctions and a sluggish economy, has embraced multiplied irrigation and fertiliser investments. This has seen it grow its wheat production from a three-month to a 15-month supply. As a result, the southern African nation has tamed imports and established a sustainable local wheat system.

“In the era of climate-induced water shortages, the judicious use of these resource cannot be over-emphasised,” said Jacktone Otieno, an agriculture economist at Jomo Kenyatta University of Agriculture and Technology.

“As the world population grows to unmanageable rates and demand for food grows, we need innovative ways of producing this food around the year,” Otieno added. “Irrigation offers a very practical solution to do this. It has been tried and tested. What we need are policies and programmes that focuse specifically on smallholder irrigation.”

Aware of the emerging shocks that threaten food production, smallholder farmers in Africa are driving the irrigation renaissance and are catching the eyes of investors, private sector actors and startups who are coming up with innovations to meet the growing demand for irrigation technologies.

“Investment costs of small-scale irrigation technologies are affordable, and implementation is relatively straightforward when compared to large-scale irrigation, so the potential for up-scaling and reducing poverty is high,” notes a 2012 report by the The International Water Management Institute (IWMI).

“In Tanzania, half of the dry-season cash incomes of smallholders come from growing irrigated vegetables,” the report further states. “In Zambia, the 20 percent of smallholders who cultivate vegetables in the dry season earn 35 percent more than those who do not.”

The portable irrigation kit targets farmers operating small land and costs between $150-$200 – up to four times the price of conventional irrigation systems.

“The whole idea behind the miniature irrigation kit was informed by the realisation that a bulk of food producers were smallholder farmers who were being buffeted by variations in weather and relied heavily on rainfed agriculture,” said Nelson Maina, the Communication and Marketing Manager at Elgon Kenya.

“However, irrigation systems were out of reach for them due to the cost constraints and the technicalities involved in installation and running the systems,” he added. “The miniature kits have been pivotal in promoting sustainable food production while building resilience among smallholder farmers to climatic shocks.”

Purity Mwasa, a smallholder farmer in Central Kenya who has used the irrigation kits on her 2-hectare piece of land where she grows horticultural produce, says she has transitioned to growing high value crops that have increased her income.

“We have been experiencing prolonged dry spells and failed rains,” she said. “The low-cost irrigation system has helped me and farmers in my area produce food throughout the year without waiting on rainfall.”

“The availability of water has also encouraged me to grow crops such as kales, onions and tomatoes that feed my family and I am able to sell the surplus at local markets,” she added.

SunCulture, another company working with smallholder farmers, offers solar irrigation solutions with a pay-as-you-go model where farmers can make monthly installments of as little as $2 per day.

This has seen a widespread adoption of the irrigation systems among farmers in Kenya, Zambia, Ivory Coast, Uganda, Senegal and Ethiopia, among other countries. Farmers have been able to increase yields by 300 percent and tame water usage by 80 percent, according to the company.

By embracing the solar option, the company is looking to prevent the emission of 20,000 tonnes of carbon dioxide each year as farmers dump diesel options for solar ones.

But with irrigation offering smallholder farmers a reliable option to grow food, as well as feed the continent and the world, caution is advised on the need to exercise sustainable use of water.

“There needs to be regulated water use as irrigation is known to contribute 70 per cent of the water withdrawal. As water supplies dwindle and rains fail, we need to put in place measures that ensure we utilise the little water we have sustainably in order to avoid adverse impacts to health and the environment,” said Jactone.