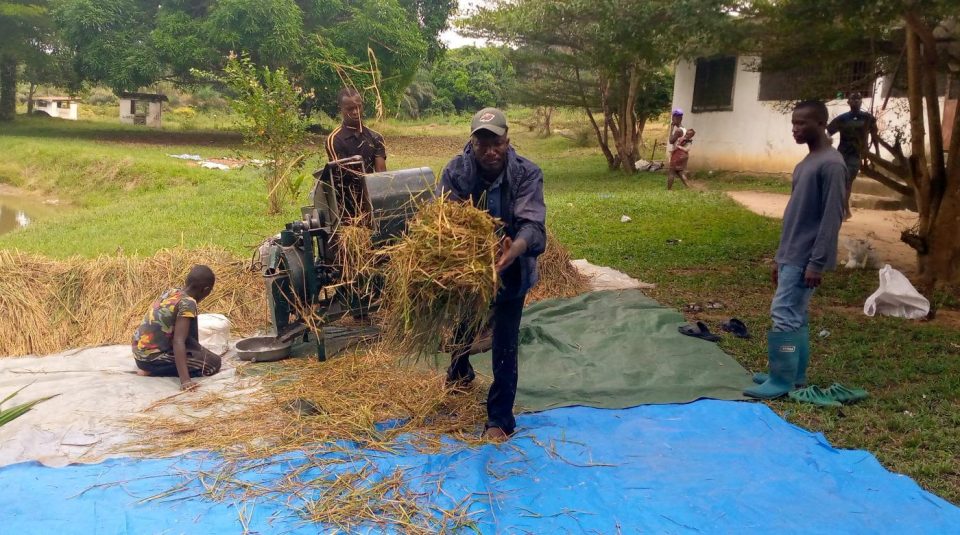 Few rural farmers will have borne more hardship than Augustine Moore.  Beginning in the 1980s, he moved from Lofa to Bong counties and eventually here to Margibi to escape the war and consistent poor harvests. Finally he gave up.

“My labor was going in vain. The farm’s yields were very low and could not sustain us for even nine months,” Mr. Moore tells the Daily Observer here on his new farm 15 minutes from Kakata. “The work was too difficult and it was making me older than my age. It was also making my family very poor.”

Mr. Moore found success by quitting “upland” farming (farming in the forest areas of the country) and moving “lowland” to the coastal area and into a new form of farming known as DeSIRA, which breeds fish and rice together in the same habitat.

“We have been experiencing poor harvests in this community for decades and no one has been telling us what to do in order to improve our yield,” says Akoi Kollie, another rice farmer that has adopted the practice. “I think this is the way it is supposed to be.”

Mr. Moore and Mr. Kollie are two of a growing number of farmers in Liberia who have successfully moved away from subsistence farming with the help of international partners. As climate change is causing higher temperatures and unpredictable rainfall, donors are trying to help Liberians adapt. Subsistence farmers – as much as 80 per cent of the population – are already facing a food crisis from the changing climate. Experts say adaptation will be critical if they are to survive.

The European Union-backed Integrated Rice-Fish Farming System (IRFFS) project is being implemented by NGOs AfricaRice, and WorldFish, and uses an improved rice variety that has a three-month growing period rather than 9-month with the local rice most Liberian farmers grow. The yield of the improved variety is also higher – up from two tons per hectare to about four-five tons per hectare. They also use the Nile breed of tilapia that matures in five months and can grow up to 60cm. The tilapia weighs five kilograms on average when matured.

In addition to rice and fish, farmers also grow vegetables such as cucumbers, lettuce, and eggplants that mature faster and are therefore less impacted by climate. The vegetables are another income-generating activity for the farmers while they are waiting for the rice and fish to grow, says Dr. Inoussa Akintayo, AfricaRice Country Representative who is leading the project in collaboration with the Ministry of Agriculture, the Central Agricultural Research Institute, and the National Fisheries and Aquaculture Authority.

Water from the fishponds can serve as a fertilizer as it contains nutrients that are beneficial to the plants. “So farmers do not have to worry about money to buy fertilizer,” Dr. Akintayo tells the Observer in an interview at his office in Suakoko, Bong County. “The lowland has more benefits in terms of yield compared to the upland.”

The project is being implemented in five counties – Gbarpolu, Grand Gedeh, Maryland, Margibi, and River Gee – with a target of 2,000 beneficiaries. It seeks to improve food and nutrition security by transforming low-yielding, climate-risky traditional rice-fish production systems into more climate-resilient, high-yielding, resource-use-efficient systems in Liberia.

“It saves farmers’ time, labor and increases their income. It is also meant to create wealth for rural farmers and improve nutrition,” says Dr. Akintayo, who is a rice expert—Plant Production and Protection Specialist—with over 40 years’ experience.

Dr. Innousa Akintayo inspects machines that are kept at his office for the farmers.

Mechanization is an important addition. Liberian farmers have labored under their own steam while farmers in other countries have turned to far more efficient machinery.  AfricaRice-provided power tillers till the soil faster and better. Seeding machines speed up the planting process.

“We also help the farmers in their post-harvest activities,” said Dr. Roger Ahouansou, the mechanization specialist at AfricaRice. “We provide them rice harvesters, thrashers, mills. It also helps in other aspects of value addition.”

From the Forest to the Lowland

Another critical goal for the international community is to move farmers away from the forest areas or “upland” zone of the country. Liberia is home to more than 40 percent of the Upper Guinea Rainforest as well as a huge number of endemic and endangered species, some of which are only unique to the country.  Protecting Liberia’s forest will be essential to helping reduce higher global temperatures. Forests are like giant lungs that absorb harmful gasses in the atmosphere that are causing what’s called “global warming”.

Farmers cut down the forests for their farms and kill the animals in the forest for food. Protecting the wildlife and plants – known as “biodiversity” – in the forests is essential to keeping the forests alive. The activities of multinational agriculture companies and logging companies have added to forest destruction.

Liberia pledged to conserve 30 percent of its forest as part of its commitment to the 2015 international climate change accord known as the “Paris Agreement”. Agriculture production and sustainable management of natural resources are pillars of the Weah-led government’s Pro-Poor Agenda for Prosperity and Development.

Mr. Moore says the project has changed his life.

“When I received the improved fingerlings and rice and AfricaRice told me that the rice matures in 100 days and the fish is 150, I knew that it was my time to move to another level,” he says of the project. “I told myself that if I can plant cassava for ten to fifteen months before I harvest or plant rice and wait almost the same time before I can harvest and still get something out of it, what more if I can deal with these short-duration crops and the improved tilapias given to me? I think there would be something different in my life.”

Mr. Moore now has eight integrated rice-fish ponds on his farm—the only one of 95 beneficiaries in the county to have achieved that size. Passers-by marvel at the farm, located in the Gborferhla, a fifteen-minute drive from Kakata. He says what he makes from his farm takes good care of his family. He is even investing in a pig farm as a backup.

“This is a new system, so many people are fascinated by my level of work here. When I first started to apply the knowledge that I have gained, many thought I did not know what I was doing. They were skeptical about this because no one had done this type of farming around here. But I was so sure from the heart that I was going to succeed,” says Mr. Moore.

Moore and his children with catches from their pond.

Akoi Kolllie is another farmer who has benefitted from the project. The manager at Karsor Farm, a 14 acres farm located in Karsoryan, Margibi, said the farmers have been frustrated with the lack of help before now.

“When AfricaRice came with this opportunity we decided to jump on it as a community,” Mr. Kollie says. “They are not only helping us with farm inputs but telling us what to do as we go ahead.”

Mr. Kollie and four other colleagues are cultivating the farm, which is the largest under the project. They are looking ahead to their first harvest. He hopes they are an example for other farmers.

“We need to prioritize agriculture if we are to develop as a nation. This is the only way Liberians can get out of poverty,” he says.

Experts agree with Mr. Kollie. Despite the huge level of dependence of Liberians on agriculture, productivity remains low. As a result, the country imports major commodities in order to feed its growing population. On average Liberia imports 300,000 metric tons of its staple food, rice, annually, costing an estimated US$200 million, said Jeanice Cooper, the Minister of Agriculture during a tour of the IRFFS project last year. That will only get worse with climate change.

“We cannot continue on this trend. That money used annually on imports can be used to help build a vibrant agriculture sector,” Minister Cooper said. “The government’s vision is to transform food and agriculture to be more resilient, environmentally, socially and economically sustainable.”

As climate change continues to cause poor harvests for traditional farmers, experts say these types of changes in farming practices will be the only way to stop widespread famine in Liberia in coming decades.