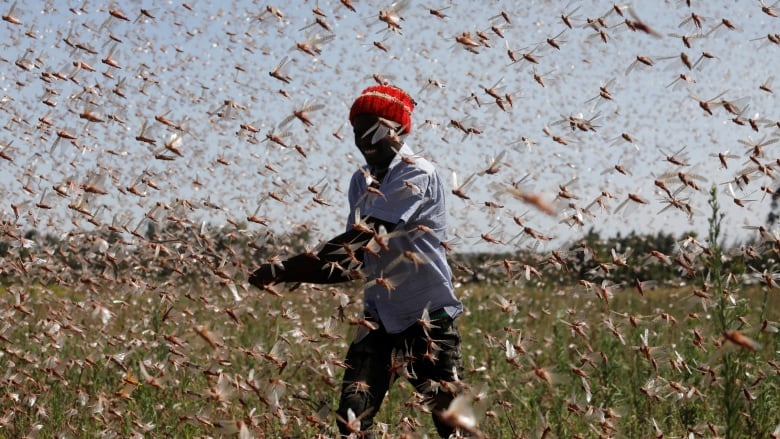 When Laura Stanford heard stories from Kenyan farmers about the devastation that the locust infestation had on their crops, the first thing she noticed was the level of despair and helplessness.

So she helped come up with a sustainable way for communities who lost their livelihoods to turn a profit — by turning the very pest that killed their crops into animal feed.

“It was a thing that an individual could do to somehow make a difference in the face of this terrible, terrible thing that was happening to them, to their communities, their neighbours, the country as a whole,” Stanford, the co-founder of The Bug Picture, told As It Happens host Carol Off.

Kenya is currently fighting its worst locust plague in more than 70 years.

The locust first made landfall in the Horn of Africa in 2019. Kenya was hit by a second wave last November, destroying tens of thousands of acres of crops and leaving millions of people food insecure.

Scientists blame climate change for creating ideal conditions for the locusts to thrive. Warm sea temperatures are creating more rain, allowing the insects to breed, and intense cyclones are dispersing the swarms further.

A swarm one square kilometre contains between 40 to 80 million locusts, and can consume enough food for 3,500 people in a single day.

There are currently 234 swarms across East Africa, with Kenya the worst hit.

Stanford said she has seen the sky turn black from locusts, calling the scene “biblical.”

The Bug Picture is an agriculture company that focuses on addressing environmental challenges in East Africa by using insects.

It is working with communities around the area of Laikipia, Isiolo and Samburu in central Kenya to harvest the insects and mill them, turning them into protein-rich animal feed and organic fertilizer for farms.

The inspiration came from a similar project in Pakistan, overseen by the state-run Pakistan Agricultural Research Council.

The key to The Bug Picture, Stanford said, is tracking where a swarm roosts for the night. Once they’ve found a swarm of five kilometres or less, locals harvest the insects that are resting on trees and bushes.

The next day, The Bug Picture shows up to buy the live locusts for 50 Kenyan shillings ($0.57) per kilogram.

Stanford said they try to help the community as much as they can, which means the locusts are then processed at local mills.

“This is someone’s entrepreneurial business that supports them and their families in these villages across Kenya,” she said.

So far, Stanford said they have received positive feedback from the animal feed millers who are using the locust meal.

If we can see … locusts as livestock, view them as a crop that can be harvested, then this is a great opportunity for people to continue the project– Laura Stanford

While The Bug Picture is intent on helping local farmers, Stanford said they are also trying to use sustainable sources of protein.

“Locusts are incredibly rich in protein, and that is one of the major challenges facing the animal feed industry in East Africa as a whole, is the inconsistent quality of available protein sources,” Stanford said.

“So this is sort of where The Bug Picture and where our passion lies … to create sustainable sources of protein making use of insects.”

Stanford said that The Bug Picture harvested about a million locusts in February alone.

But despite their work, Stanford admits that the problem cannot be solved without the aerial pesticide spraying by the Food and Agriculture Organization of the United Nations (FOA).

The FOA is optimistic heading into the rainy season, thanks to the spraying campaign. The group is reporting smaller swarms in Kenya, and says it is generally calmer across the region than this time last year.

Stanford said they will continue their efforts, which complement the FOA, by targeting smaller swarms.

The Bug Picture is also going to make their project open source, and she hopes the idea will spread.

“If we can see … locusts as livestock, view them as a crop that can be harvested, then this is a great opportunity for people to continue the project after the official project ends,” she said.