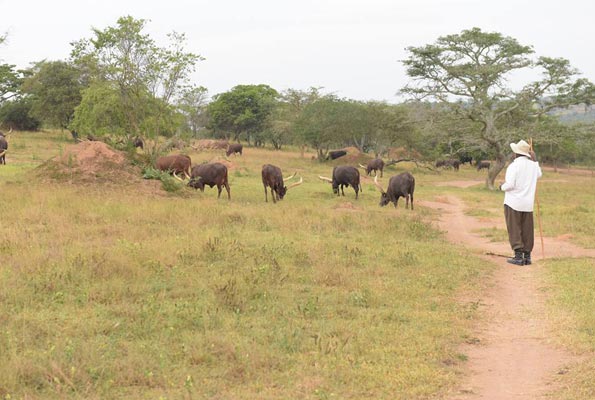 Under the agro-industrialisation programme, Uganda seeks to increase commercialisation and competitiveness of agricultural production and agro-processing, government ranches are one of the key enterprises that will play a pivotal role towards achieving this goal as they act as source of livestock seed in form of live animals, high-grade semen, and embryos required by households to start up livestock enterprises that will guarantee them increased production and steady income to deliver them out of poverty.

Since their establishment during the colonial period, government ranches have played an instrumental role in revolutionising Uganda’s agriculture sector. Over the years, the government through the Ministry of Agriculture and other development partners have been importing and distributing hybrid milking cows to all government ranches located in different regions of the country to improve the local dairy herd.

In the recent publicised report, figures from the Ministry of Agriculture showed Uganda’s dairy exports to have increased to 63 percent within three years, this has been arguably due to an increase uptake of improved genetic resources which increased from 12.5 percent in 2020 to 14.2 percent in the 2020/2021 financial year, according to NAGRC&DB data that was shown to me on my request.

As of today, government through NAGRC&DB has 13 ranches suited in different ecological zones of the country under varying production systems. These ranches serve an urgent role in creating availability of breeding stock to farms for purposes of improving their herds.

Of recent, I attended a ceremony at Kasolwe stock farm in Busoga Sub-region where a five metric tonne per hour capacity feed mill plant was being launched. This will add value on cereal harvests minimising on billions of shillings government has been spending annually on importing livestock feeds.

According to Dr Peter Beine NAGRC&DB executive director, the feed mill will also benefit the Busoga people by creating market for their cereal harvests which include Soya bean, sorghum, maize sugarcane, among others.

The government embarked on capacity building on all its ranches having faced devastating civil strife and political turmoil that led to the loss of livestock and destruction of infrastructure.

Besides the feed mill plant, other facilities including but not limited to hatcheries, laboratories, study centre, milking parlour have been set up on various stock farms across the country, the brains behind these projects seek to rehabilitate all ranches across all regions and restore them to their glory, which will benefit the surrounding communities and position Uganda for export-oriented, sustainable and profitable livestock enterprises.

One of the major challenges cited by the custodians of these ranches is encroachers, some of the people who have encroached on government farmlands have done so under the name of urbanisation.

In February, the Minister for Agriculture, Frank Tumwebaze warned local authorities in Mbarara to stop eying agricultural land for their urbanisation projects.

The minister assured them that just because research and other farm developmental works are not visible daily, doesn’t, mean the land is idle.

I don’t intend to seem as some who is against urbanisation. I’m aware of the fact that not all activities of urbanisation negatively affect agriculture, urbanisation may cause land values to drastically increase, raising the value of farm assets which provides potential retirement income to farmers.

However, local authorities with grandiose plans for urbanisation that may result in encroaching on farmlands should have into consideration how their acts can affect the food production value chain triggering food insecurity and increasing the country’s import bill on improved animal genetics and food products.

To mitigate the risks that come along with agricultural land encroachment while addressing our desire for acquiring land for urbanisation, there should be systems put in place that will ensure that land is used for what it was designed for.

High cost of feeds pushes farmers out of business as milk,meat prices soar