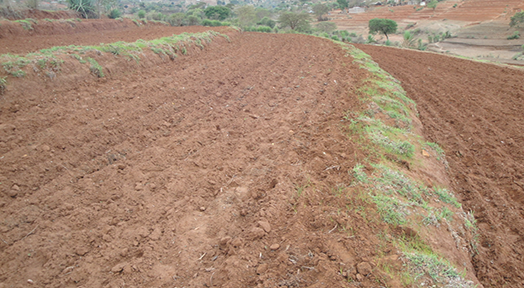 The National Agricultural and Rural Inclusive Growth Program (NARIGP) has surveyed 16 villages along the 7,000 acre Baraka ridge in Kuresoi North for terracing in the effort to encourage conservation agriculture among small holder farmers.

Area Agricultural Extension Officer Elijah Kimani says the water retention trenches will help in averting erosion of the fertile top soil from farms to nearby rivers while ensuring that rain water is redirected underground to recharge aquifers for sustainable water sources.

Kimani says 1,200 small holder farmers along the sloppy and temperate area are already receiving 28,000 seedlings of tropical fruits like Hass Avocado, pears and plums   as well as one million splits of Bracharia grass and 100,000 seedlings of Gravellier Robusta seedlings to plant along the trenches to prevent soil erosion on their farms.

With the ongoing heavy rains in the area, the initiative comes as an enabler to 11 farmer groups of vulnerable women and youth that have already been funded by NARIGP to sustain startups in Irish Potato, poultry, apiculture and dairy value chains.

He says the program`s emphasis on environmental conservation seeks to enable targeted farmers conserve soil on their small lands that are supporting enterprises in the four rewarding value chains.

Kimani says extensive gullies in the agriculturally productive area, drying springs and siltation of water pans is attributable to poor farming practices which cause farms to yield below potential.

He anticipates the one month program to help scale up production per acre of Irish potatoes from the current 50 to 110 bags and with more nutritious soil to support fodder cultivation the average milk production will rise to 20 liters up from five liters per cow.

The group`s chairperson of Salome Mwangi says the group of 30 women is banking on such complementary programs to grow the enterprise and subsequently help in improving livelihoods in the area where farming is a mainstay for two-thirds of the population.

Margaret Wambui who lost crops to surface runoff every season commends the project for lending timely support to struggling small scale farmers like her.

She says with water retention trenches on her five acre farm, she is looking forward to recording a bumper harvest at the end of this season.

The secretary of the group Jane Omosaobserves that with protected farms and grants from NARIGP, unlike in the past, there is a profit motive and a pride of place among small holder farmers .She says many are now hoping to venture in to all the supported value chains for better livelihoods and a robust rural economy.

He says 18 members of the group will be able to protect their three acres and plant highly nutritious fodder for their dairy goats for more milk and an expanded herd.

Last year, the group received five hybrid goats worth Ksh.100, 000 from NARIGP and 100 improved local chicks from the Nakuru County`s directorate of livestock as a boost to their joint dairy enterprise.

Githunguri says that in the same period the money equivalent to 55 per cent of the Ksh.240 Million since 2018, the program has already funded 217 out of the approved 572 Agri- business proposals to the tune of Ksh. 12 Million.

How Uganda’s tech-savvy ‘Generation Z’ is transforming its agriculture

No perfect solution: Africa’s smallholder farmers must use both traditional and new practices