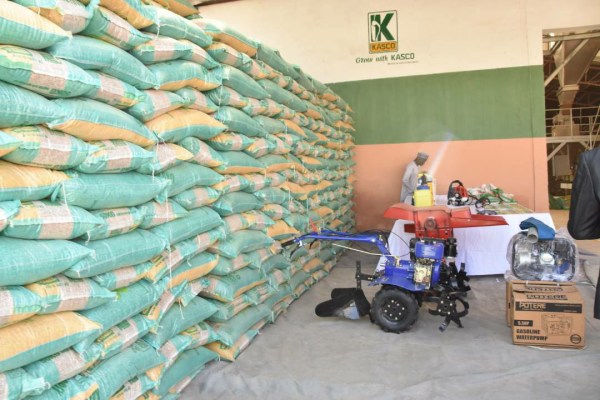 The Kano State Fertilizer Company (KASCO) Ltd was, has been ordered to be shut down immediately by the Federal Government for allegedly adulterating fertilizers and manually mixing the components of the NKP 20:10:10 blend of the agricultural input.

The order to close the company, owned by the Kano State Government came Presidential Fertilizer Initiative and the National Sovereign Investment Agency (NSIA), through its subsidiary, NAIC-NPK Ltd.

KASCO, which is headed by Mr. Bala Inua, a close friend of the state governor, Alhaji Abdullahi Umar Ganduje, was discovered, during a sting operation, be adulterating the NPK 20:10:10 blend of fertilizer and selling same to unsuspecting members of the public.

In a video circulating on the social media, labourers at the factory were seen manually mixing fertilizer raw materials with shovels and using same to fill fertilizer bags on the factory floor. Hazardous chemicals are used to blend fertilizers and if badly handled, could endanger the lives of people. When not in its right proportions, the chemicals could also destroy the soil and permanently compromise its ability for valuable crop yield

It was learnt that Kano State owns two fertilizer blending plants but have allegedly abandoned them due to lack of maintenance.

Our source hinted that besides adulteration, there are also fears that manual handling of fertilizer blending may provide access to unauthorized people to some raw materials such as Urea ammonium nitrate that could be used for illegal purposes.

According to Wikipedia, Urea nitrate is a fertilizer-based high explosive that has been used in improvised explosive devices in Afghanistan, Pakistan, Iraq, and various other terrorist acts elsewhere in the world, including the 1993 World Trade Center bombings. This is why the Federal Government, through the national Sovereign Wealth Authority, has exercised control of the chemicals to ensure they do not end up in the wrong hands.

The Nigeria Sovereign Investment Authority (NSIA) through its subsidiary, NAIC-NPK Ltd is in charge of the implementation of the Presidential Fertilizer Initiative (PFI), an initiative of the Federal Government, designed to ensure high-value fertilizers are made available to Nigerian farmers at affordable costs. It also aims at delivering significant quantities of NPK (20:10:10) fertilizers in time to farmers for wet season farming.

Adulteration of fertilizers have recently begun to spike in some parts of the country. A few weeks ago, the Nigeria Police Force, Niger State Command, intercepted a truck-load of adulterated fertilizers, heading to Bida from Minna, the state capital.

According to the state Police Public Relations Officer, Wasiu Abiodun, the discovery was made by Policemen attached to the Kpakungu Division of the state, while on patrol along the Kpakungu-Bida Road

The PPRO said investigations led to the arrest of the driver of the vehicle and one Alhaji Maikudi Abdullahi, the owner of the factory where the alleged adulteration of fertilizers was taking place. A total of 456 bags the adulterated fertilizer was recovered from this factory.

Phone calls to Mr. Bala Inua, the CEO of Kano State Fertilizers Company was not answered before going to press.

Farmers to benefit from Kuresoi land under rehabilitation

COCOBOD gives over 90,000 bags of fertilizers to farmers in Western North

Bumper harvest to save Zimbabwe US$200m