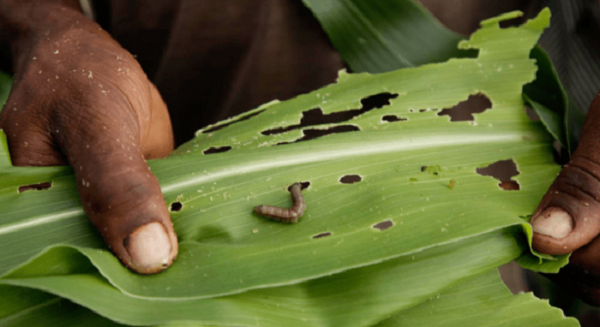 Mr. Prosper Mensah, the Yendi Municipal Agricultural Extension Officer has advised farmers to beware of Fall Armyworm (FAW) which can destroy a lot of crops in their farms within hours.

He called on them to check on the early signs or symptoms of FAW infestation, which include; eggs on upper/lower surface of leaves, stems, non-plant materials and nearby vegetation.

Mr Mensah gave the advice when he educated 20 Farmer Representatives on farming practices of Yendi Multi-stakeholder Committee third Quarterly meeting organized by Tropenbos Ghana, one of the partners of Research for Development and Innovation Agriculture and Learning (ReDIAL) Project funded by European Union (EU) at at Yendi in the Northern Region.

He said after hatching young caterpillars (1stinstar) feed superficially on the leaves resulting in semitransparent patches on the leaves and FAW was sensitive to insecticide at that stage therefore susceptible to control at that stage.

On infestation on mature plants, he said the caterpillar fed on developing tassel of mature plant thereby reducing pollination and yield and advised them to be alert-scout the fields regularly and take control action as soon as any early signs and symptoms were seen and contact any Agriculture Office for advice and appropriate Management measures.

He asked the farmers to go for the government free Armyworm Chemicals and educated them on the method of the application of the chemical to enhance high and quality yield to meet standard demands.

He said the Yendi Municipality had 28 registered agro input dealers assigned with NABCO Officials from Department of Agriculture to keep records on sales.

He reiterated that the new prices of NPK and UREA were NPK GHS 53.00 instead of the old price of GHS 48.00 and UREA GHS 50.00 instead of GHS 45.00 and advised them to take note and purchase them from the registered dealers at the approved price.

He said in Yendi Municipality ReDIAL organized them into zones including; Gbungbaliga zone, Yendi zone, Pion zone, Wabung zone, Zang zone and Sunson zone and advised the representatives of the groups to educate their people on the meeting.

Yalzoli Tamal Na Alhaji Shamrock ReDIAL Committee Chairman appealed to the Government to establish a plant pool in Yendi for combine harvesters and tractors to be sent to the area for farmers to rent.

He also appealed for a fertilizer Depot in Yendi to supply them to other Districts within the Eastern Corridor.

Mr. Tana Peter, the Yendi Municipal Social Welfare Officer said there was fertilizer shortage in the system and warned those re-bagging the Planting for Food and Jobs (PFJ) fertilizer into different sacks to sell to make profit to desist from the practice.

He appealed to PWDs to organize themselves into groups to benefit from the farming inputs sold at reasonable prices.

During an open Forum, the participants appealed to the government to remove subsidy on fertilizer and make it an open market product just like how cement was sold to avoid smuggling.