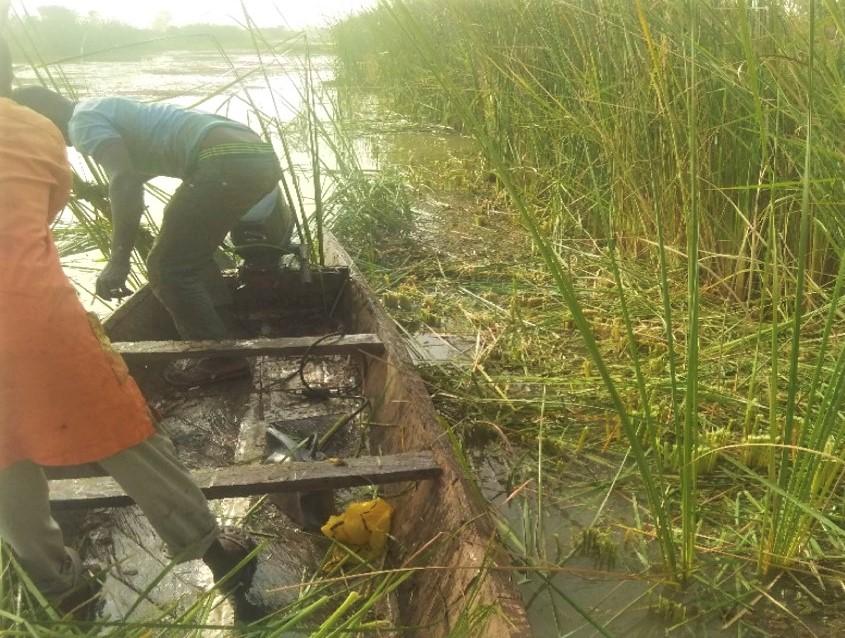 COLLEGE PARK, Md., Feb. 25, 2021 /PRNewswire-PRWeb/ — As part of an ongoing project years in the making, Richard Kohn of Animal and Avian Sciences at the University of Maryland is collaborating internationally to provide a multi-faceted solution to an invasive weed wreaking havoc in Nigeria. By exploring the potential uses of Typha (commonly known in the U.S. as cattail), Kohn and his collaborators have worked directly with the people of the Hadejia Valley to offer Typha as an elegant solution to two major problems: the health and deforestation problems caused by excessive use of firewood as the main cooking fuel, and the lack of animal feed options during the dry season. Not only can properly harvesting and drying Typha reverse the adverse effects this weed causes for irrigation and rice production in the area, but it can also be converted into biogas for a clean cooking fuel or animal feed for local livestock. This solution has the potential to create significant improvements for the region and beyond, with positive environmental, human health, and economic impacts.

“Typha is a major problem in Africa,” says Kohn. “It grows very aggressively where there is over fertilization, blocking waterways and invading rice and other agricultural fields. Before this project, it was basically being chopped down and left on water banks to rot because it wasn’t seen as being worth anything. But we thought that if we could find ways to use it, people might actually want to go out and chop it themselves.”

With funding from the World Bank, Kohn and his collaborators across the Polytechnic University of Madrid, the Federal University of Gashua Nigeria, the National Agricultural Extension and Research Liaison Services Nigeria, and the Federal Ministry of Water Resources Nigeria examined this problem in the Hadejia Valley from an agricultural, environmental, socio-economic, and human health perspective to provide the most sustainable solutions possible.

“There were multiple problems we were looking to address with Typha,” explains Kohn. “First, coming up with an alternative cooking fuel was a big focus. The people mostly cook with firewood, so they are contributing to deforestation in the area causing local climate changes and also burning wood in the home that causes a lot of health problems. An estimated 95 thousand people are dying a year from the smoke in this region. Second, livestock gets very thin in the dry season due to lack of available feed, causing loss in productivity. It also leads to a lot of conflict between herders and crop farmers because livestock end up eating the crops other farmers are trying to grow. We thought maybe we could help solve both of these problems and make the Typha useful.”

Getting to the point where the Typha was usable as biogas and animal feed didn’t come without challenges. According to Kohn’s team, the drying process was particularly difficult since the plant is 80% to 90% water. If you cut it and let it dry like hay, it essentially rots before it is usable. The team found, however, that if you cut it longitudinally, it dries fairly quickly and can then be put to use. The team then analyzed different stages of Typha maturity to see when in the plant’s lifespan it is best cut and used for biogas or animal feed. They found that particularly the immature Typha is quite useful for animal feed and can improve animal performance, while it can be used to produce biogas at immature and mature stages of life. Overall, however, Typha proved to be a viable source of both feed and biogas for the region.

The next hurdle with using Typha as biogas in the long term as Kohn describes is the maintenance of the systems used to digest the Typha and harvest the methane for cooking fuel. “Building family-sized and commercial units has been a success, and we have seen support for the process as these systems are built and implemented,” says Kohn. “But where often these systems break down is when it comes time to clean them out and maintain them. That is what remains to be seen, but we are hopeful given the economic opportunities that it will continue to take off.”

The economic opportunities are particularly exciting for the women in the region, explains the team. Eva Iglesias with the Polytechnic University of Madrid says, “There is an important role for jobs here because maintenance and adopting machinery is very important. It provides the opportunity of offering the services of chopping the plant and makes it valuable. For women especially who can’t leave the house to work for cultural reasons, they identified this as a business opportunity for them specifically. Many of the women have goats that are often their main source of income, so it gives them an opportunity to feed their goats and is a good strategy to help close the gap and empower women.”

Ahmad R. Musa with the Federal University of Gashua Nigeria adds, “Women and youth were excited to be involved in the project and that this might be something that could change their lives. The Royal Highness of Hadejia even expressed his happiness for this project.”

Kohn and collaborators are all looking forward to the benefits this work can bring to the region, across Nigeria, and potentially beyond into other countries as a model for dealing with invasive plant species. “I consider this a very successful collaboration, and there is a high opportunity for acceptance and adoption,” says Fernando Escribo, project coordinator with the Polytechnic University of Madrid. “It can also apply to other projects in other countries as invasive weeds grow dramatically across Africa and around the world. We hope that there will be great opportunities for entrepreneurship in the area coming from our work.”