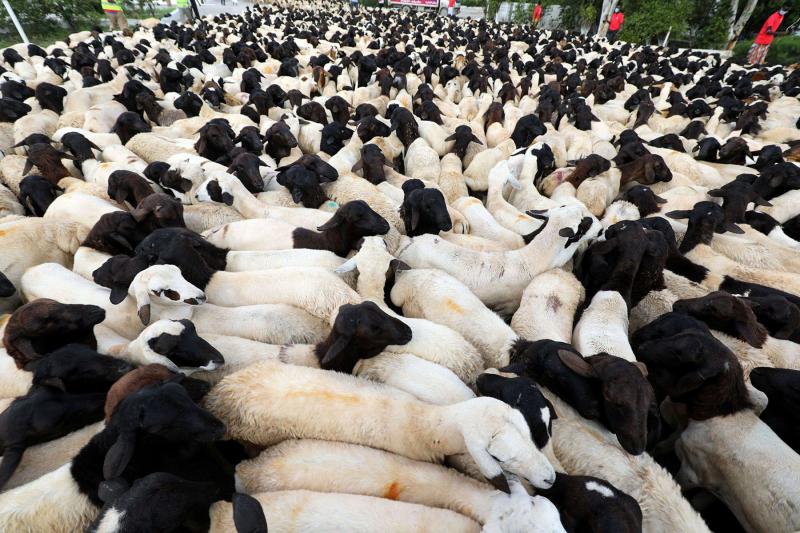 The annual Muslim pilgrimage to Mecca is a time for celebration, not least among Somalia’s livestock herders and traders who export millions of livestock to feed pilgrims.

But this year coronavirus restrictions mean the Hajj is a small, largely Saudi affair, and Somalia’s economy is suffering.

“Business is bad,” said Yahye Hassan who works in the capital Mogadishu’s largest livestock market where the pandemic has suppressed trade.

“The effect of coronavirus is apparent,” said Hassan. “The Arab countries are not in need of animals from Somalia, and the nomadic people who would bring the livestock to town for trading are reluctant due to the fear of infection.”

“There is a major decrease in demand,” confirmed Nur Hassan, another Mogadishu-based livestock trader, who said the shortage of domestic and foreign buyers was catastrophic, while supply had also seen a dip as herders stay away.

The Hajj, which began last week, is mandatory for all Muslims, who are physically and financially able, to undertake at least once in their lifetime and involves pilgrimage to the holy city of Mecca and its Grand Mosque.

But this year Saudi authorities have restricted the Hajj to those already inside the country — fewer than 10,000 domestic pilgrims are expected, compared with the two million mostly foreign visitors who attended last year — effectively cancelling the annual ceremony for most.

Saudi demand accounts for nearly two-thirds of Somalia’s annual livestock exports, according to the World Bank, which reports that more than five million sheep, goats, camels and cattle were shipped northwards from Somali ports through the Gulf of Aden and the Red Sea to Saudi Arabia in 2015.

Exports are predicted to be sliced in half this year, primarily due to COVID-19 travel restrictions.

“The Hajj cancellation has massive implications on the lives and livelihoods of the Somali population,” said Ahmed Khalif, Somalia country director at the Action Against Hunger charity, adding that livestock accounts for around 60 percent of household income in the largely rural country.

“It is a blow to the Somali pastoralist households particularly, who heavily survive on livestock exports to Saudi.”

Up to three-quarters of Somalia’s export earnings come from livestock, said Khalif, making the foreign sale of animals a crucial lifeline for Somalia’s economy.

The annual Hajj is normally a reliable boom time for herders, but not this year.

“The livestock exports happen all through the year, but the majority — 70 percent of live animals — happen during this Hajj season,” said Khalif.

The evaporation of exports has meant an oversupply in local markets where prices have dropped dramatically, with camels going for $500, half their usual price, according to Khalif.

Good news for a relatively small number of well-off consumers, but a disaster for the majority of livestock-keepers who rely on sales to buy food, pay back debts and cover basics such as school fees.

Making matters even worse, keeping animals for longer than expected is a drain on limited resources, said Isse Muse Mohamed, a livestock trader in the port town of Eyl, who warned of “widespread effects” for the economy.

“Keeping hundreds of goats and sheep for an extra year will obviously incur costs, including the salary of the keepers,” he said. “This is a real crisis.”

Falling incomes, increasing costs and the loss of the Hajj market are hitting owners such as Adow Ganey, in the southern town of Hudur.

“When the family wants cash for necessary items, like sugar and clothing, we used to take one or two goats to the market,” he said, “but this year things have changed: we have to sell more goats to get the cash we need.”

For some of Somalia’s livestock herders and traders, already assailed by decades of conflict and political instability, ever tighter cycles of drought and an ongoing locust plague, the cancellation of the Hajj may be the straw that breaks the camel’s back.

“We have never seen such a situation,” said Abdqadar Hashi, a livestock exporter in the city of Hargeisa, “it’s affecting everybody.”