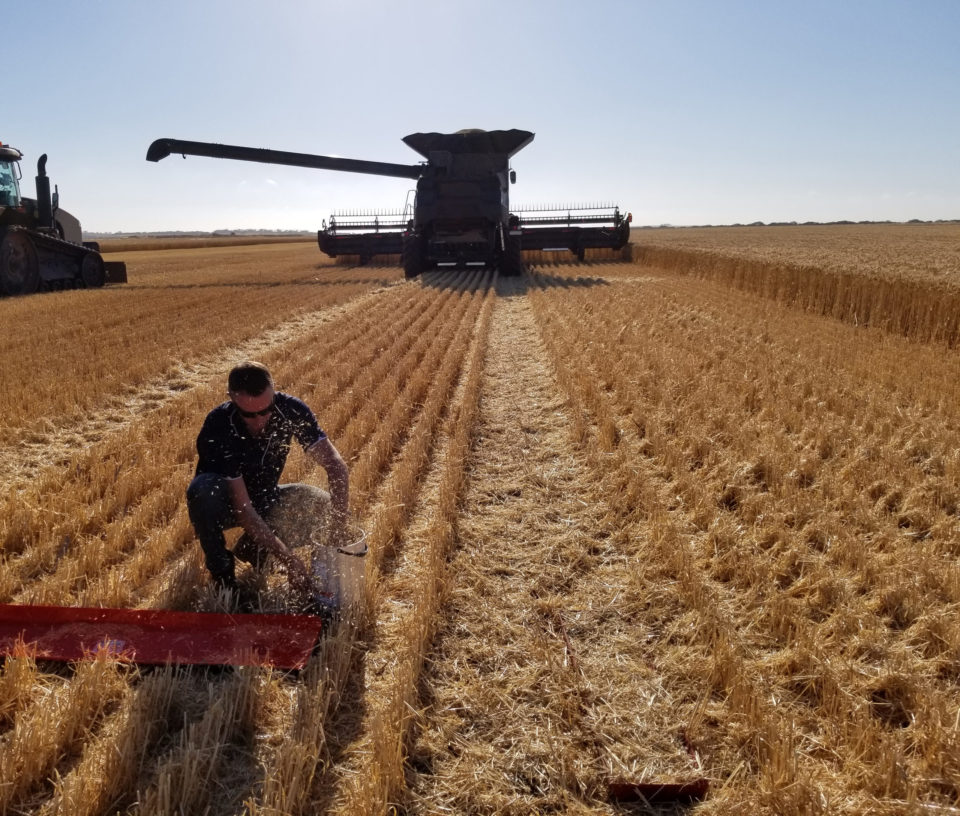 “Every year we’re seeing a massive investment of time, money and resources going into growing the best crop and then at harvest I kept seeing that some farms were throwing away five percent, or more, of their yield because there wasn’t a system out there to accurately quantify and calculate the value of harvest loss,” said Kringe, an agronomist who has worked on small and large farms around the world.

Kringe was tired of seeing combines run at less than full capacity and recognized that loss monitors were constantly fluctuating. He also found some sensors weren’t always accurate leading to operators running the machine at what they believed was an acceptable level while losses piled up or speeds slowed down to the point where they became an issue.

After identifying the problem, Kringe went to work on a solution inventing the Bushel Plus system, which is the first tool that lets farmers accurately test losses and quantify them on any combine in order to calibrate their machine and put more money in their pockets.

After building several prototypes and spending thousands of hours testing, Bushel Plus is now the most sophisticated yet user friendly tool to measure harvest loss on the market.

“One of the first things we identified early on was that the system had to have a housing unit that covered the pan until we were ready to drop it,” Kringe said. “Anyone who has operated a combine will understand the pan must be protected to keep kernels and chaff from filling it prior to your point-in-time drop otherwise the sample’s integrity is destroyed.”

Kringe designed a housing unit that not only protects the sample pan but is easy to move from combine to combine during harvest. Two high-strength magnets connect the system to the combine, where it’s usually placed under the straw elevator or on the machine’s rear axle.

Once connected, a wireless signal activates the drop function which releases the pan onto the ground where the combine passes over and a sample of swath is deposited in the pan for testing.

“We knew it had to be simple, fast and accurate,” said Kringe adding that the battery-powered system is good for more than 100 drops before being recharged. “No one is going to stop for an extended period of time during harvest to take a sample but if we can do it in minutes and the result is a small tweak to the machine or recognition that speeding up won’t cause additional losses then we can save and potentially earn a lot of money with this data.”

And the results have spoken for themselves as many of the largest manufacturers and dealers in the world have incorporated the Bushel Plus system into their internal training, client combine clinics and prototype testing.

“This system makes my job a whole lot simpler, not to mention safer and cleaner,” said Dan Labossier a product specialist with New Holland in Canada. “I’m able to use it on multiple combines and get immediate results. The covered design I see as a must for sample integrity.”

Safety was another major factor that went into the design of system, which comes with two different sized pans — a narrow pan ideal for tall stubble such as oilseeds and a wide pan ideal for shorter stubble like wheat, barley and maize.

“Unfortunately we all know someone who has been hurt or injured on the farm,” Kringe said. “The truth is that we were seeing farmers run beside the combine in order to throw a makeshift pan to collect a sample. One stumble could have a catastrophic effect. With the Bushel Plus you can be a safe distance away from the machine, or sitting in the cab, and drop the pan remotely.”

Once the sample is collected, Kringe identified another problem.

“It was taking too much time to clean a sample with sieves which are bulky and quite frankly annoying to use,” he said. “Now it’s as simple as dumping that sample into our air separator and in less than 30 seconds you have a clean sample of the losses that are coming out of the back of the combine.”

The Bushel Plus air separator features a variable speed control that can be adjusted up for heavier crops like beans and dialled down for lighter seeds. Once the clean sample is collect it is weighed. The result is entered into the Bushel Plus app, which is available on any smartphone, where all of the calculations are done for the user.

“We saved one to three bushels per acre,” said Dan Jan who owns and operates a farm in Canada. “That’s between $11 to $33 per acre. So it’s well worth the product cost and few minutes ti takes to test harvest losses.”

Results like those, and from the increasing understanding of their machine means more savings in yield and time every harvest.

“Some of our clients have been able to increase their speed by two kilometres per hour without seeing any adverse effects on losses,” Kringe said. “Those speed gains mean they’re done earlier, helping them beat the weather and maintain quality levels with less hours on the equipment.”

In other cases, tweaks to the internal settings of the combines have resulted in savings of two to 10 percent of the total yield, providing a significant return on the investment of purchasing a Bushel Plus.

“Now, decisions like when to stop cutting in the evening are rooted in evidence,” he added. “You should never see farmers on their hands and knees scraping the ground ever again.”

The systems versatility, allowing farmers to quickly test losses from the sieves, header or in the straw has created demand on all different sized farms around the world.

“There’s a reason why we’ve had farmers from around the world, in places like Canada, Australia, the United States, the UK, Germany, Latvia, Chile, Japan, Russia and others buy the system — it works,” Kringe said. “It’s all about putting more grain in the bin and leaving less of it in the field.”

That expansion is continuing as Bushel Plus is looking to partner with an importer and distributor in South Africa. Inquiries can be sent to Marcel@BushelPlus.ca

“First and foremost we are looking for a partner,” Kringe said. “Someone who believes in providing value to farmers and has deep roots in the agriculture community.”