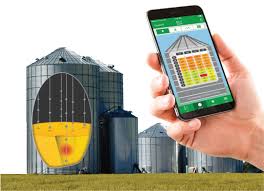 Temperature is the key to safe grain storage. When grain goes out of condition, regardless of the cause, there is
always an unusual increase in temperature. Temperature is the only truly accurate indicator of grain quality for
those who manage grain.
Knowledge of the causes of deterioration and spoilage in grain is essential to the grain manager. Although
more is yet to be learned, grain workers and scientific researchers have jointly given much sound information
with which to work.
Grain is a living organism. Like other living things, it breathes (respires) and it may become sick. Excessive
moisture, high temperature, and poor grain condition (damaged kernels) are generally considered the most
important factors that lead to trouble in stored grain.
The use of moisture tests in receiving grain is an indication of the great importance given moisture as a criterion
for storage ability. Some tend to over-emphasize moisture content to the exclusion of all other factors, but low
moisture content is not enough to ensure trouble-free storage. In fact, deterioration from excessive moisture can
occur in grain which is placed in storage at a uniform moisture content below that considered safe for long term
storage. Temperature and atmospheric changes can cause certain areas within a mass of stored grain to rise in
moisture above the critical safe moisture level.
Grain condition refers to the soundness of grain. It has been demonstrated that unsound grain (grain with a high
percentage of damaged kernels, greater number of microorganisms, and with deteriorative chemical changes) is
much more likely to heat in storage than sound grain of the same moisture content. Both grain respiration and
the growth of microorganisms are thought to be affected when grain is unsound.

The three specific causes of heating are respiration of the grain itself (metabolism of viable grain),
microflora (microorganisms such as fungi and bacteria), and insect infestation.

All three contribute to total respiration and heat production below 135° F. One type of heating alone can cause
trouble, but one type of heating can also serve to trigger another problem which will contribute to total heat
production.
The increased temperatures are likely to excite the other two causes of heating. When grain respiration alone is
the cause of heating, visual inspection of the trouble area, while turning, will show little evidence of cause. If
moisture translocation has brought about the increased rate of respiration of the grain, aeration can be employed
to correct the situation.
The important thing to note about microorganisms is the fact that they respire and tend to increase the rate of
respiration of the grain. Thus a rise in temperature can mean microorganism growth. If the temperatures of the
grain mass are low, such growth can be slow and temperature rises relatively small.

Slowly rising temperatures warrant investigation of the causes. When indications appear, look closely for growth of microorganisms as you inspect your grain.
During the last 70 years, many factors have made accurate temperature knowledge even more important than before. For example:

These are the reasons why temperature information is important to a modern cost-conscious grain manager. No matter what type of grain is stored, the same basic principle holds true: You must know the temperature of your grain to know the condition of your grain. It is imperative that the grain manager has accurate, complete, and up-to-date temperature information for good grain management. Monitoring the temperature of grain on a regular basis gives the manager the best chance to make a correction when a temperature change is occurring. Knowing the temperature of the grain makes it possible for the fans to be run only when they are needed, saving money in utilities.
Now, there are several ways to obtain this temperature. 1) You could use the “Feel and Smell” method. All that is required here is for the grain manager to feel the side of his bin and smell inside the bin in an attempt to detect heating. Obviously, this method has its drawbacks.
2) The “Thermometer Method” is another way to read temperatures. With this method, pipes are inserted into the grain mass and a thermometer lowered into them. After a time, the thermometer is raised and the temperature read for that point. This method also has several serious drawbacks and is very time consuming. (A thermometer is not designed to furnish quick readings).
3) A third concept is the temperature cable method. One type of temperature cable utilizes thermocouples to read temperatures. A thermocouple is nothing more than two dissimilar metals soldered together to make a heat sensing point. TSGC, Inc cables have thermocouples made of copper and constantan (an alloy of copper and nickel), the most sensitive combination made for grain bin temperature scanning systems.
Thermocouples are the most widely used temperature sensor for several reasons. They are rugged, low-cost, dependable, and accurate. The measurement is a point measurement with fairly quick response to temperature change. Watching the trend of the temperatures provides a clear indication of unusual temperature activity.
TSGC, Inc. is one of the largest suppliers of grain temperature monitoring equipment in the world. Headquartered in America’s Heartland, our administration, fabricating, sales and service divisions are located in Spirit Lake, Iowa. We have an extensive network of contractors representing our products and services nationwide and in over forty countries. TSGC, Inc. is dedicated to serving you.

How Uganda’s tech-savvy ‘Generation Z’ is transforming its agriculture