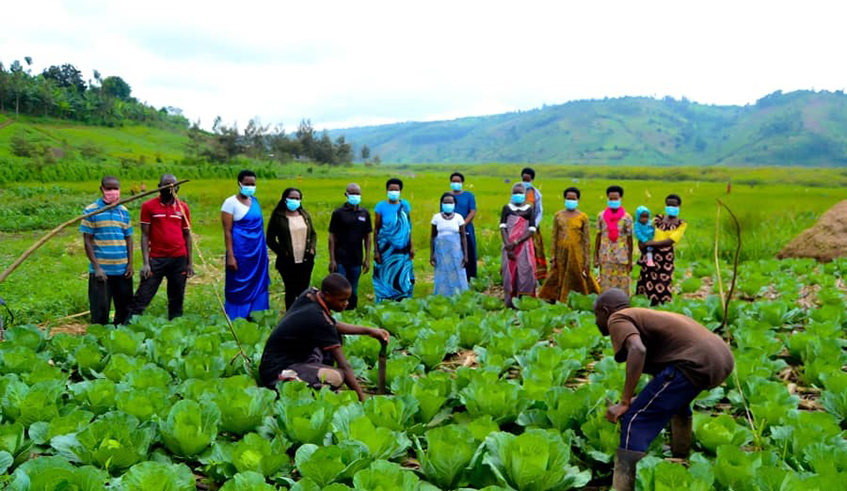 Women smallholder farmers in Ngoma District have found a market for their vegetables following a government directive allowing schools to directly source agricultural produce from farmers as part of the School Feeding Programme implementation.

The programme aims to feed over 3.3 million children in both primary and secondary schools.

At least Rwf38 Billion is required to support the programme per year based on Rwf56 support to school feeding per student per day but there is still a huge funding shortfall.

Sourcing food supplies from farmers close to the schools was proposed as one of approaches to ensure efficiency of the programme considering the limited resources and ensure timely supply.

Marie Jose Mukeshimana, the representative of the 11 women’s association ‘Twite Ku Buzima’ said that supplying vegetables mainly cabbages to GS Bare, a 12-year-basic-education (12YBE) school with 1310 students in Mutenderi Sector will empower them with increasing revenue and agricultural productivity following the stable market.

The cooperative also got support from Jean Chrysostome Bikomeye-a Rwandan Scholar in the US who mobilized financial support using a fundraising campaign on Facebook to help boost school feeding programmes in the community where he hails from.

The fund-raised support is also to help vulnerable women smallholder farmers in the community to boost vegetable productivity and supply to the nearby schools.

A recipient of the 2008 Presidential scholar, Bikomeye was a valedictorian for the William Penn University (WPU) 2012 graduating class.

Bikomeye is now pursuing his doctoral studies at the Medical College of Wisconsin in Milwaukee.

Bikomeye’s research interests include the intersections between climate change and public health. His work revolves around the benefits of climate change mitigation and adaptation for human health.

He focuses on greening interventions to improve chronic diseases outcomes including cancer and heart diseases with a focus on the disadvantaged populations with limited resources to advance health equity.

It is in this context that In order to seek for a sustainable way of keeping students fed with locally grown fruits and vegetables, part of the Rwf850,000 raised will be invested in a pilot intervention to grow vegetables in a partnership with a local women’s association “Twite Ku Buzima” which they will be supplying to the school to boost school feeding programme.

Mukeshimana the president of the cooperative composed of 11 women said that they are about to buy irrigation equipment so as to boost agricultural productivity which they will supply to the school.

“Since our association started three years ago, we have been manually irrigating our fruits and vegetables. With these funds, we will purchase a small irrigation pump and other necessary farming tools in our journey as we fight against malnutrition,” she said.

The women started two years ago doing casual labor tilling for others to get a wage and later invested Rwf40,000 savings to start growing their own vegetables on a small piece of land.

“We started growing cabbages on a small plot of land where we could harvest cabbages worth over Rwf200,000 every three months. Today we have increasing productivity because we are now growing on a bigger plot of land.

Once we buy irrigation equipment we will buy another big land near water bodies where we can grow in all seasons. With increased production we will supply our harvest to many schools,” she said.

“Supporting each other is rooted in Rwandan cultural values. I took advantage of my Facebook connections to support the most vulnerable like the children we helped with affording lunch at school,” said Bikomeye.

“Let’s think of an impact we could make if the most privileged members of the society gave their birthday spending to charities at least once every three years! The money can feed thousands of students, pay “Mutuelle de Santé” for the poor or other important social causes that can change the lives of many,” he added.