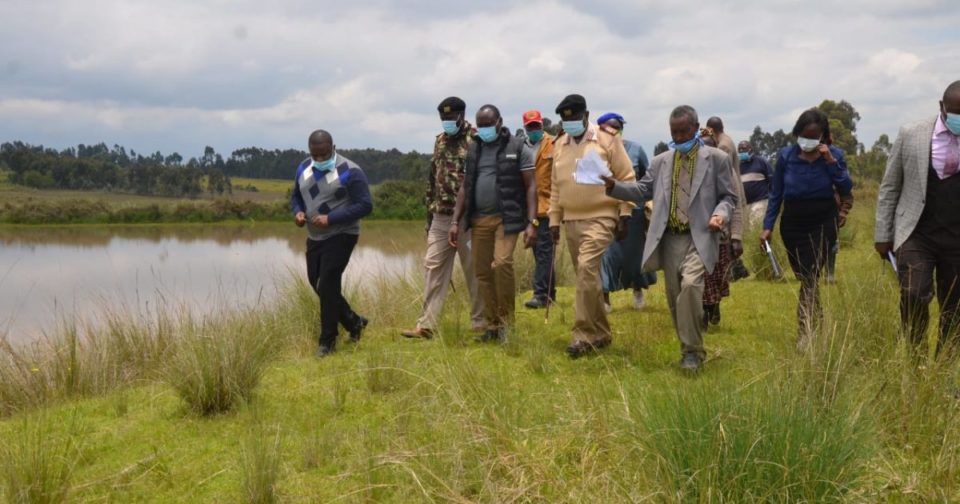 Nyandarua County Commissioner Benson Leparmorijo has called on the residents to take advantage of the envisaged expansion of the irrigation network to grow high value crops.

Speaking at Mumbi dam Friday when he led a team of officers from the National Irrigation Authority (NIA) in handing over the site to a contractor for desilting, Leparmorijo announced that the national government had pumped in Sh184million to expand the county’s land under irrigation to an additional 1000 acres.

“The community around Mumbi dam will also benefit from five green houses in addition to desilting. Desilting of the big Gwa Kiongo dam will see its capacity increased to 270, 000 cubic meters for irrigation and will also comprise distribution of water to homes for domestic use while Gathimaki and Gathima will distribute water to farms about 12 kilometres away from rivers,” added Mt. Kenya West Regional Coordinator Eng. Risper Okumbe.

At the same time, Leparmorijo encouraged the residents to concentrate on business farming to boost their earnings.

Ministry of Water and Irrigation Legal Officer Nderi Ndiani assured the residents of technical support from NIA to ensure the residents maximized their yields through irrigation.

“NIA will deploy agronomists to educate the farmers on high value crops that will translate to increased income at household level,” said Ndiani, while urging young people to take advantage of the expanded irrigation to gain modern farming skills for more money.

The legal officer urged the residents to desist from growing the traditional crops that have flooded the market thus bringing in meagre returns.

On his part, NIA’s Corporate Communication Officer Daniel Nzonzo while acknowledging the need for public participation said the farmers would benefit from Technical- Know-how, while allowing them to own up the projects for posterity.

Mumbi dam Chairman Charles Munyeki noted that the expansion of the dam was long overdue saying a lot of farmers would benefit from the anticipated green houses.

“None of us will be seeking white color jobs with more farms under irrigation. We have tried fish farming and we will employ more modern farming skills to ensure we succeed in business,” added Munyeki.