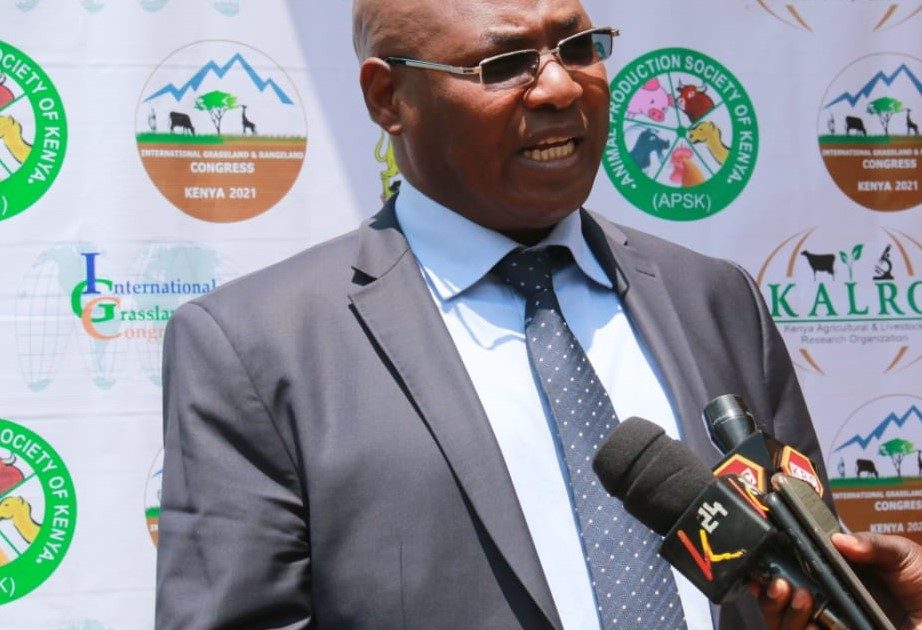 The government is geared to scale up commercial farming by at least Sh400 billion as part of its strategy to achieve food security under the Big Four Agenda, State department for Livestock Principal Secretary Harry Kimtai has said.

He said part of the plan was to increase agro processing Gross Domestic Production by about Sh 130 million through six processing hubs and high-volume standardized inputs from large-scale farms.

Speaking ahead of the upcoming virtual joint International Grassland and Rangeland congress to be held at the Kenya Agricultural Livestock Research Organisation (KALRO) in Nairobi, the PS said key interventions was to unlock 50 large-scale private farms to bridge the production deficit of priority value chains, which includes fodder production.

Kimtai however said the opportunities can only be complimented if prevailing challenges of grassland and rangeland resources were addressed.

“Many changes are limiting the contribution of grasses to the productivity of livestock and these include dependence on few grasses species and, overgrazing”, he said.

The PS acknowledged that the impact of the droughts on the population have been increasing exponentially from 1970s to date threatening the sustainability of rangeland resources and creating economic and environmental challenges that need urgent attention to safeguard the well-being of the communities especially the pastoralists.

He explained that productivity of rangelands has been greatly affected by the frequent droughts and floods that characterize the impacts of climate change and variability.

“Kenyan rangelands, especially the ASALs, are susceptible to these changes of weather and are characterized by high incidences of poverty and malnutrition requiring frequent relief assistance,” he said.

The situation, he added has been worsened by increasing human population and consequent shrinkage of the rangeland resource base and rural urban migration in search of alternative livelihoods.

Urgent measures and interventions, he noted are therefore required to protect the rangeland resources and enhance their sustainable utilization and livelihoods.

“Investments in the rangelands monitoring, rehabilitation and improvement will greatly contribute to the attainment of food and nutritional security as envisaged in the Constitution of Kenya and the Vision 2030, and in line with worlds’ sustainable development goals (SDGs),” he said.

The PS said that the upcoming grassland and rangeland congress to be for the first time in Africa in Nairobi will promote the interchange of scientific, and non-scientific information on all aspects of grasslands and rangelands

“This first-ever joint congress in Africa is significant, as this region offers diverse and unique tropical savanna ecosystems, which are home to some of the most economically important grasses in the world,” the PS said.

Kimtai noted that the conference comes at a time when the government this year launched ‘Rangeland Management and Pastoralism Strategy, 2021-2031 that looks at both reduction of degradation in the rangelands, increase in land productivity, development and adoption of technologies and supporting enterprises in these areas.

KALRO Director General Dr. Eliud Kireger said the institute was working towards the introduction of more adapted and productive grasses and improved livestock such as the Boran and Sahiwal cattle.

He added that in order to deal with the perennial feed shortages, KALRO has also introduced, through its Arid and Rangelands Research Institute (ALRI), re-seeding program, where grasses, mainly indigenous and adopted, are re-grown in the rangelands.

“We have secured registration of four range grass varieties by KEPHIS that will facilitate commercialization of these varieties and make the seeds readily available to farmers for establishment of new pasture fields and restoration of degraded rangelands,” the DG said

Dr. Kireger further said that KALRO has laid the foundation for pasture breeding work in Kenya by collecting and conserving (in situ and in the gene bank) over 300 grass accessions from the larger northern and southern Kenya rangeland.

The DG also confirmed that in the coastal lowlands and highlands which are currently experiencing droughts and in other parts of the country, Brachiaria grass varieties released by KALRO have been introduced to support the livestock sector.

The upcoming Congress which will be held virtually from 25th to 29th October has been organized under seven-thematic areas of grassland and rangeland research and development with a balance between the people/social/policy and on the more traditional topics.

In Kenya, rangelands occupy 80 per cent of land and home to about 10 million people. They support about 70 per cent of the national livestock population and 90 per cent of wildlife that is key to the tourism industry.

The ministry of agriculture : Congo wants to import large quantities of grains from Romania