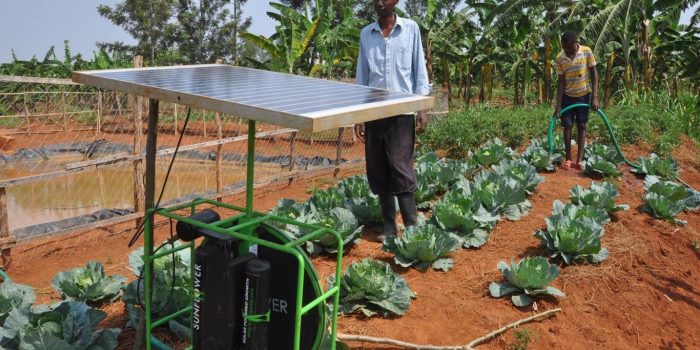 Solar panels in the African continent have started trials and the process has had such promising results in Kenya that it will be deployed this week in open-field farms.

The technique is called agrivoltaics and it harvests solar energy twice: where panels have conventionally been used to harness the sun’s rays to generate energy, they are also utilized to provide shade for growing crops, helping to retain moisture in the soil and boosting growth.

A long research collaboration between the University of Sheffield, World Agroforestry, and the Kajiado-based Latia Agripreneurship Institute has shown optimistic results in the semi-arid Kajiado county, a 90-minute drive from the Kenyan capital of Nairobi, and this week the full project will be officially launched.

The cabbages that were grown under the 180, 345-watt solar panels were bigger and healthier than those grown in control plots with the same amount of fertilizer and water.

“We wanted to see how crops would perform if grown under these panels,” said Wairimu. “But there is another pragmatic reason behind the technology: doubling up the output of the same patch of earth to generate power and cultivate food can go a long way towards helping people with limited land resources”, she said.

According to Dr Richard Randle-Boggis, a researcher at the University of Sheffield’s Harvesting the Sun Twice project, the trial initiative will determine the potential of agrivoltaic systems in east Africa.

“We needed to build a test system to see if this technology will be suitable for the region,” Randle-Boggis said, reiterating that, “unlike conventional solar mini-grid systems, agrivoltaics have the additional benefits of improving food and water security, while strengthening people’s resilience against the climate crisis, as well as providing low-carbon electricity.”

“Besides reducing water loss, the shade of solar panels also mitigates some of the stress experienced by plants due to high day temperatures and UV damage”, Randle-Boggis said.

“Women here can spend up to 300 Kenyan shillings (£2) on a bodaboda (motorcycle taxi) fare to the market just to buy vegetables worth 100 Kenyan shillings,” said Anne Macharia, head of training at Latia Agripreneurship Institute.

The solar panels can be placed three meters from the ground that allows farmers to work underneath.

Randle-Boggis acknowledged the technology has limitations but says that in “areas of Kenya which are not currently suitable for horticulture, it may be possible to grow other crops under the improved environmental conditions under the panels”.

The technology has been successful in the US, France, and Germany.

Farmers To Get Their Soils Tested At Farm Level

Are Kenya’s cotton farmers being sacrificed in war against GMOs?