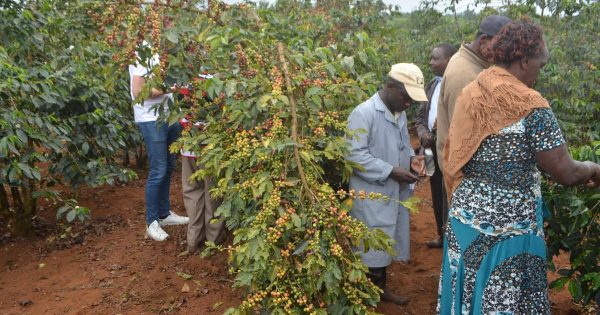 As coffee prices in the county improve, a section of farmers from Mathira constituency have embraced organic farming as a way of upgrading production and the quality of their produce.

The farmers who are plying their trade at Kanyama village say they no longer use conventional fertilizers, but instead use organic fertilizers as well as manure in order to ensure their crop conforms with the standards of European markets.

The farmers say they hope that their produce will triple and that their soils are not affected by residues left behind by harmful fertilizers.

“I started farming with organic fertilizers this year and I have already started seeing change. For instance, my coffee bushes have increased production, ” said Jane Wanjiku, a farmer based in Mathira said.

Job kareithi who produces an organic fertilizer called Biodeposit says that many farmers are increasingly using his product due to its benefit.

“We as manufactures are encouraging farmers to use organic farm inputs because many consumers abroad follow on what farmers use to grow their produce at the farm level,” he said.

“Some coffee gets rejected due to chemical residues that exceed the set parameters especially in European markets,” said Kareithi, adding that is why he ventured into making organic fertilizers.

To encourage farmers to take his method of farming, Kareithi says that they have grouped farmers in zones not only in Nyeri county but also in Kirinyaga where they conduct training sessions on the proper use of organic fertilizers.

The move comes at a time when the government through the ministry of agriculture has embarked on a campaign to increase coffee production by rising the number of income farmers earn.

Among the raft of measures that have been announced by Cabinet Secretary of Agriculture Peter Munya is the new coffee act that will see the return of a coffee board and the establishment of the coffee exchange backed by a vibrant coffee auction.