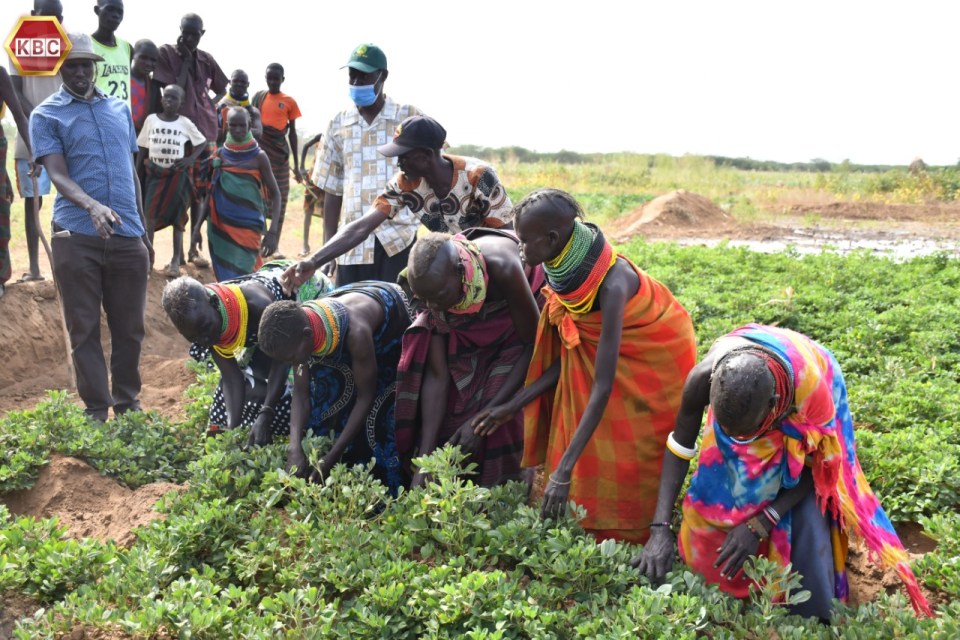 It is only 8 o’clock in the morning and the searing heat in Lodwar, the largest town in Turkana County, is showing no signs of relenting.

My host pokes fun at my markedly sluggish movement as he reminds me of the journey ahead to Loima, a Sub-County boasting nine of the 51 irrigation schemes in the County.

We hit the road to the Kalemunyang irrigation scheme, some 70 kilometres away from town. On the way, we drive through barren landscapes, leaving clouds of dust behind. Our convoy would soon find itself driving through large river beds that are totally dry.

At some point, it almost felt like an endless journey in the wilderness. Suddenly, my heart begins to race, hoping we don’t get stuck as the wheels of the land cruiser crawl the deep sand.

It’s supposed to be the rainy season, but all over the place are dirt fields, acacia trees, and shrubs, scattered stick huts. Also noticeable are herds of goats walking through parched earth, probably, in search of food and water. The only green vegetation visible is the invasive Prosopis juliflora tree otherwise known as ‘Mathenge’ in Kenya.

Turkana is Kenya’s second-largest county and is among 23 counties classified as Arid, and Semi-Arid Lands (ASALs) based on the relatively low amounts of rainfall received annually.

Meanwhile, like the biblical doubting Thomas, I am yet to spot with my own eyes anything that can grow in this drought-ravaged land.

As the rising dust settles, I suddenly spot what looks like a muddy pool and in a moment the convoy stops. I look through the window, and a cold wind blows into the car –a welcome relief, that helped cool our bodies from the high temperatures and behold the River Turkwel, the largest and the only perennial river that has been described as the oasis of hope.

Adjacent to the river is the ‘miracle land’, where green fields spread across hundreds of acres.

Welcome to the Kalemunyang irrigation scheme that is supplied with water from the constructed canal along the river. The scheme has been earmarked for the production of two improved seed varieties namely; Ndovu and Mwangaza, in a strategic plan that seeks to position the county as a groundnut production hub.

The first seed trials conducted in partnership with Egerton University in 2019 revealed that Turkana is excellent for groundnut production. This is especially so, given that the legume crops planted here are free from cancer-causing toxins because of the virgin lands.

The groundnut project supported by Food and Agriculture Organization (FAO) among other partners, strives to improve food and nutrition security while empowering communities financially.

A third of the total landmass in Turkana is arable and sustainable for crop production. The county has already rolled out an ambitious groundnut strategy that will see over 18,000 acres under groundnut production which is expected to bring Ksh 2.3 billion annually in the next 4 years.

The scheme has 495 acres with 516 farmers each farming 1.0acre. So far, more than 500 farmers have been trained in over 300 acres spread across 10 irrigation schemes put under groundnut production.

The momentum for production of the crop is picking up and by the end of 2022 over 3500 acres are expected to be under production and the training of 14,000 others is in the pipeline.

County officials in charge of agriculture alongside various partners acknowledge that introducing the pastoralist community to farming has not been a walk in the park. They are, however, impressed that residents are reaping the benefits, prompting the shift from subsistence to commercial farming, which has particularly been boosted by a ready market.

Last year, 7 metric tonnes harvested were consumed at household, while others were sold at a local market and 250kgs brought by Egerton University as seed.

Ms. Agnes Esinyen, a community-based facilitator and farmer, indeed notes that the project is paying off. Together with other farmers, she braves the scorching sun to tend to her ‘goldmine’. Having enjoyed the first fruits of her harvest, Esinyen hopes to get more land to grow the crop but she’s limited by the social-cultural practice that denies women the right to control and own land.

Crop production in the region is dominated mainly by women who also have limited access to productive resources and therefore not available for collateral to access credit.

The County government has committed to solving the land question by issuing title deeds which will commence soon.

However, there is a need for a social, economic, and political mindset change in to catalyze agricultural production and productivity, as highlighted in the strategic plan.

For now, Esinyen has to make the best out of what is available and crop farming has become a source of providence for her family.

Having suffered the vagaries of weather in the previous years, she is happy that a new dawn where the community will break away from aid dependency is fast approaching. Like many others who have joined the venture, she’s not worried about what children who are at a higher risk of prevalent malnutrition, will eat.  Their dietary needs are catered for by the nutritious nuts that are alternated with other healthy food crops like orange flesh potatoes, cowpeas, and sorghum.

“Besides generating income, there are many health benefits, including enhancing soil fertility and quality when used in crop rotations, food security and as nutritional therapy for our children especially the Mwangaza variety that is in demand for its high oil and protein content” she explains.

According to Esinyen the new improved variety is good because it matures in two to three months and is rarely susceptible to pest attack.

The groundnuts, she says, play a key role in breaking the fall armyworm life cycle hence a sustained bumper harvest is guaranteed unlike in the previous seasons that saw farmers incur heavy losses after their farms were destroyed by locusts. FAO had to step in to eradicate the pests.

“The crop takes a short time to grow and generates high yields that give us good money. We have a ready market provided by Insta EPZ which has promised to buy in bulk at ksh90 a kilo of unshelled groundnuts while a kilo of shelled can fetch up to Ksh200 at the local market” she said.

To ensure a sustainable supply of quality seeds, which is a challenge, Egerton University has established a community seeds system where they have entered into contract farming with the farmers.

The university’s crop and science professor Paul Kimurto assures they will continue to build capacity for the farmers by equipping them with the latest agronomic skills to facilitate optimal groundnut and seed production.

Combined with new technologies, the university targets one metric tonnes from every acre under crop in Kalemunyang.

If the plan succeeds, the county will be the leading producer of aflatoxin-free high-quality seeds in the country surpassing Elgeyo-Marakwet.

For sustainability of the project, FAO in conjunction with Egerton University has trained county technical officers and community-based facilitators to support the farmers in the provision of extension services.

Esinyen who has so far trained 90 farmers knows too well that the initiative is not only the source of their livelihoods but carries the hopes of future generations as well.

The story is the same at Nanyee irrigation scheme which has 293 acres with 760 farmers each farming 0.25 acres.

The reception by the women donning traditional beaded necklaces and the trademark braided Mohawk is ecstatic. Brimming with joy in the wake of their encounter with persons who have helped transform their livelihood for good, with songs and dance, they usher us to the farms where harvesting is taking place.

The good tidings that come with farming have broken cultural norms and men have gone back to the fields after they lost part of their precious livestock to drought.

“Compared to livestock keeping crop farming is less tiring and more profitable. I have a few heads of cattle but due to the harsh weather patterns, I can no longer keep as many as I used to. I don’t rely on them as a source of livelihood. Since groundnut production was introduced, I am settled” says another farmer.

Moses Muriya fears that blocked canals, if not rehabilitated, may derail their efforts.

“We may not get high yields if desilting of some of the canals is not done. Some farms are also far from water channels hence rehabilitation and expansion of the irrigation schemes, is important” he adds.

FAO representative to Kenya, Mrs. Carla Mucavi, affirms the sustainability of the project even as she disclosed that a local seed system will be established to ensure a constant supply of quality seeds.

The UNHCR is set to replicate the same in Kakuma and Kalobeyei refugee camps.

WFP which has been involved in the rehabilitation of some of the canals said the County was a step closer to achieving food and nutrition security adding that market linkages will enhance productivity.

“This is one great example of empowering locals financially at the same time ensuring consumption of healthy diets,” Head of Food Systems and Resilience, Claudia Ahpoe.

According to the County Crops Officer, Okata Gabriel, the project is on the right track and the two schemes are expected to yield 90 metric tonnes in January.

AS WE HEAD BACK TO LODWAR MUSING ON THE ALREADY ACTUALIZED AMBITIOUS PROJECT, I NO LONGER SAW A DRY AND ARID LAND BUT ONE FLOWING WITH MILK AND HONEY. ECHOING THE WORDS OF THE AREA GOVERNOR JOSEPHAT NANOK, FROM A FOOD RECIPIENT TO A FOOD DONOR TURKANA IS THE NEXT FRONTIER FOR DIVERSIFIED FOOD PRODUCTION, FREE OF AFLATOXIN.

Nigeria has potential of earning $2.98b from Cassava export yearly