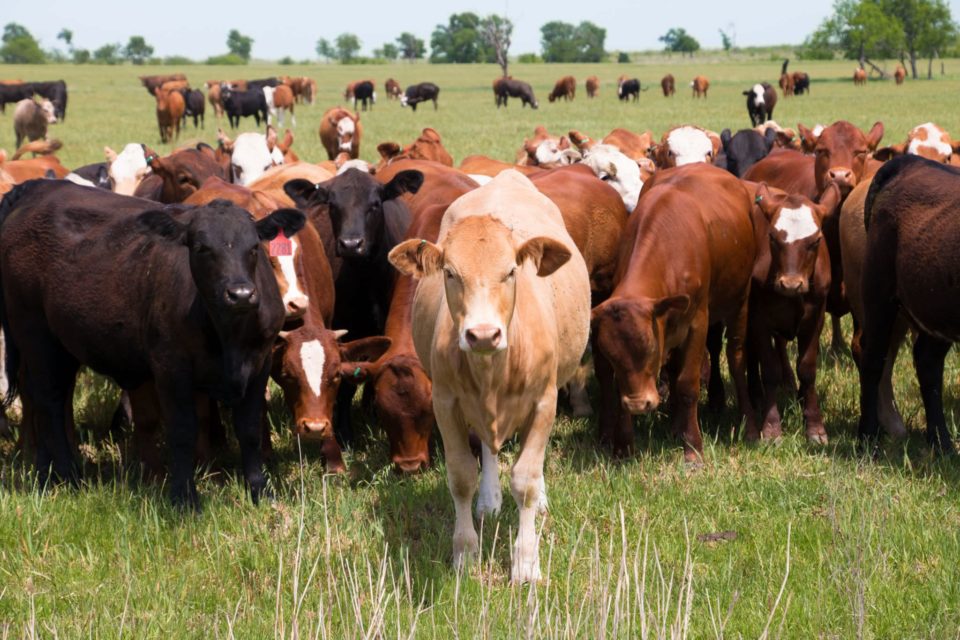 Figuring out the best way to graze cattle, increase soil health, help the environment and save money seems like a daunting task. But the folks at Cheney Lake Watershed knew it was possible, so they found a rancher who was willing to test a variety of cover crop mixes and grazing areas.

Bright and early Thursday morning, more than 40 farmers and ranchers went over to Chad and Cassondra Basinger’s ranch, Basinger’s Beef, in Pretty Prairie to observe and listen to how the couple is utilizing the land. This was one of several demonstration farm meetings Cheney Lake Watershed, based in Hutchinson, plans to undertake this fall.

“You can get more grazing days if you strip (break it into small fields) it up,” Chad said. “We have the next paddock made. The cattle kind of understand what’s going on.”

With more than 80 acres set aside for their 50 cattle, the Basingers are not only feeding the cattle, but they are improving the soil for future cash crops. Last year, they grew soybeans on these fields.

“We’re trying to find things that are a reasonable cost,” said Howard Miller, the outreach coordinator for Cheney Lake Watershed. “You are building armor for your soil.”

The Basingers planted four cover crop mixes, which ranged in price from $19 to $34 an acre. They found their cattle enjoyed the sunflowers the most — followed by millet. Kaufmann Seed, out of Hutchinson, helped Chad with the mixtures, some of which included Red Ripper Cowpeas, Hay Mungbeans and Vivant Brassica.

Daniel King, of Jako Farm Fencing in Hutchinson, helped Chad with the portable fencing. Being able to roll up the fencing in about five minutes, and then place it down on a new pasture, makes moving pastures doable.

Chad is also adding portable water systems that he can move to each two-acre plot. As this is a teaching experience, Chad took baseline soil tests before he began the program.

“It’s a work in progress,” he told the group. “We’re trying to get an economic value.”

Dave Stucky, of Champion Ridge Farms in Kingman, rented out his land for decades. A few years ago, his son took over the operation. They started planting cover crops and running cattle. Stucky’s fields are designed in a pie shape, so the water source remains in the center.

“We know that financially our grains were not making money,” Stucky said. “Cattle were an extra cash crop.”

Stucky was excited to attend the demonstration session. He said he sees it as both a learning experience and a networking process.

The Stauffer brothers, who farm together in Arlington, agree. Although they already use cover crops for grazing, they wanted to hear about the different mixes and the smaller pastures.

“We’re looking at moving to a more intensive grazing system,” Brian Stauffer said. “We do some, but not as intense as this.”

The brothers are fifth-generation farmers. Although they already have water supplies set up in a variety of locations, they have not varied the grazing pastures or food supply as much as the Basingers have.

“We’ve got lots of ideas,” Damon Stauffer said. “We’re here to learn what to tweak.”

There was a question-and-answer session, with several farmers discussing the pros and cons of different fences, solar panel sizes and the benefits of sunflowers to cattle. Most of the farmers already use cover crops to some degree and are interested in increasing their use.

“There are livestock or critters under the soil,” Miller said. “They are what makes the soil healthy.”