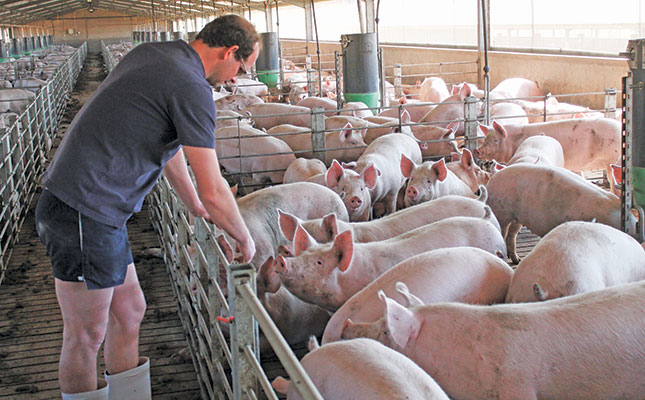 Back in 1981, when brothers Ian and Rob Butt established their Butt Farming business in KwaZulu-Natal’s Kamberg Valley, they could scarcely have imagined that their initial commercial pig production operation of 200 breeding sows and mostly own-built infrastructure would grow to become a trend-setting piggery of 3 100 high-performance Topigs Norsvin breeding sows.

Now semi-retired, Ian and Rob have left the top management of their present-day 2 000ha business spread across the Kamberg and adjoining Hlathikhulu valleys in the capable hands of their sons.

Ian’s son, Stephen, does the administration and finance, and Rob’s son, Joshua, is responsible for the cropping, and a herd of 550 breeding cows.

Not a blood relative, but “very much” part of the family, is piggery general manager Colin Heyman, who leads a team of assistant managers.

“We keep a close eye on the implementation of both long-term planning and the day-to-day activities in the business to ensure that our vision of having a modern, efficient and profitable pig operation is met.”

His efforts are an essential supporting role to the key business of farrow-to-finish, namely producing piglets for fattening and slaughter.

Butt explains that the business has undergone continual evolution since 1981, with a number of significant expansions and adaptations having taken place over this time. The latest of these saw the piggery’s total capacity increase to 40 000 pigs at any one time.

“We operate a weekly batch system. This means that every week, various groups of sows are mated or farrow, while various groups of slaughter pigs are weaned, moved to the relevant stages in their fattening and finishing cycles, or marketed and transported to the abattoir.”

Butt Farming weans about 1 750 piglets a week, and delivers approximately 1 700 finished slaughter pigs to the abattoir.

Butt points out that this all-in/all-out system does not allow for much flexibility in production and marketing. All finished pigs, irrespective of their weight at 22 weeks old, are trucked to the abattoir.

Their marketing approach, in combination with modern genetics, housing and feeding, and strict biosecurity and herd health protocols, enables the business to produce finished pigs that are uniform in size and weight within and between batches. Butt describes it as precision livestock farming.

Butt Farming takes monthly delivery of 180 replacement gilts, aged between 13 and 17 weeks old. On arrival, they are housed immediately in a separate quarantine facility, where they spend five weeks undergoing testing to ensure they have not brought in any diseases, especially any forms of Mycoplasma bacteria, which could be transmitted to the rest of the operation. Once cleared, the gilts are moved into the piggery’s breeding unit.

Strict biosecurity
“When Colin joined us in 2007, our piggery was undergoing an expansion, and as part of this process, we totally depopulated the operation,” Butt recalls.

“We repopulated with disease-free stock and have since been certified as a specific-pathogen-free [SPF], or high-health, piggery. This is a status that we work hard to maintain through strict biosecurity controls.

“We don’t have Mycoplasma, APP [Actinobacillus pleuro-pneumonia], swine dysentery, or any of the other Big 7 nasties that are recognised threats to piggeries worldwide.”

He says that Butt Farming’s SPF status means the piggery has significantly reduced its use of antibiotics, and the sows and slaughter pigs are productive and efficient.

The feed mill produces about 500t of pig feed weekly. The business buys in soya beans, which are processed into full-fat soya meal for use as a plant protein ingredient in the pig rations.

Also bought in and mixed into these rations on-farm are the 20% maize grain shortfall, soya oilcake, vitamins, minerals, fibre, bran, and sunflower oilcake.

The business makes use of a consultant animal nutritionist, who is an expert on feeding Topigs Norsvin pigs for maximum performance, and a consultant veterinarian.

Having its own feed mill and dedicated nutritionist enables Butt Farming to control the origins and quality of the raw feed ingredients, and implement changes to feed rations rapidly.

The raw ingredients and mixed feed are tested regularly for quality and possible health risks, such as mycotoxins.

The computer-controlled feed mill produces 41 different ration formulations, and at lower cost than if the feed were bought from a feed company.

Butt says precision feeding of different groups of pigs maximises feed efficiencies and ensures that target weights are achieved. It also allows for targeted fat-to-muscle ratios, as required by clients who buy the carcasses of the finished pigs.

“In carcass terms, we market about eight million kilograms annually. Our target this year is to achieve 2 500kg of pork sold per sow,” he says.

Butt says Pork 360 has given Butt Farming the added benefit of guiding standard operating procedures across the piggery so that employees follow common protocols and processes rather than inadvertently working at cross purposes.

“In the unlikely event of a problem being found with any pig carcass of ours, or its products, we can trace as far back as to when the particular pig was born, and in which batch of piglets, to find the cause of the problem and prevent it from happening again,” Butt explains.

“Systems like this in South Africa’s pork industry make it easier for the entire industry, or parts of it, to renegotiate resuming pork exports to countries that may have generically banned imports of all meats from South Africa due to issues such as an outbreak of foot-and-mouth disease.”

Heyman says these upgrades have enabled the piggery to incrementally reduce the time that each sow spends alone in a gestation crate after insemination from the outdated industry norm of 16 straight weeks, to the present industry-leading group housing system that sows are moved to straight after insemination.

This group housing significantly improves sow welfare by allowing the animals to socialise and walk around for most of their gestation.

Importantly, Butt Farming has not experienced any reduction in the average number of weaned piglets per sow since doing away with gestation crates.

“The only crates we now use are the artificial insemination crate that the sow spends five days in, and the farrowing crate for the protection of the piglets until they are weaned at four weeks old. The rest of the time our sows spend in group housing in the same way as our slaughter pigs do,” says Heyman.

Off-farm diseases
“We have our own fleet of trucks and trailers for tasks such as collecting feed ingredients from off-farm suppliers, picking up and dropping off staff who live off-farm, and delivering finished pigs to the abattoir. We have our own trucks because it gives us strict control over managing any potential biosecurity risks that the trucks pose to the piggery.

“We use our trucks only for our own needs, and we have them washed and disinfected frequently to kill any pests and diseases they might have picked up while off the farm,” he says.

About 40% of Butt Farming’s finished pigs are transported to an abattoir in Meyerton, Gauteng, about 440km away. To ensure the health and welfare of these animals, the triple-decker transport trailer is of predominantly aluminium construction, and is fitted with a hydraulic tail-lift and an on-board cooling system.