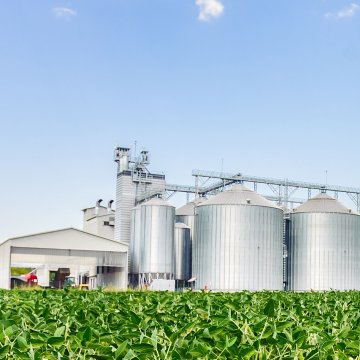 For Gary Woodruff, grain bin safety is personal. When he was in college, his dad’s best friend was killed in a grain accident. Two more people Woodruff knew personally have died in similar tragedies over his career.

“They’ve all been great, intelligent farmers. Good, wonderful people, but they didn’t listen to what they’ve been told,” he says.

DAMAGED GRAIN
The dangers of out of condition grain are never far from Woodruff’s mind as a District Manager for GSI. He is especially concerned this year as farmers start to handle the wet, damaged grain that was grown in 2019.

Last season, many farmers harvested moldy, immature, or frost damaged grain. Going through the combine and other handling, it was damaged further, Woodruff says. “These conditions resulted in a larger percentage of fines and grain possibly already impregnated with molds,” he explains.

Once grain is in a bin, the quality won’t improve. It can only get worse. The best way to keep grain from deteriorating is getting it cold as quickly as possible. Experts say insect damage and other issues dramatically decline at temperatures of 50 F and below.

WET GRAIN
High moisture corn was reported across the Corn Belt last harvest and can also be a problem. Woodruff suspects northern states may have the most extreme crop damage. At most, wet grain can be stored a few months. Warm winter temperatures shorten its life further. As spring approaches and temperatures creep up, Woodruff reminds farmers, “Poor quality corn above 14% moisture will go bad really, really quick.”

“A lot of people won’t have access to a dryer and won’t want to take the hit and sell right away this spring. Then it may be totally out of condition, possibly a total loss, before they decide to move,” Woodruff predicts.

THE COST OF ENTERING A GRAIN BIN
When grain is out of condition it’s difficult to handle. Farmers think, “I have to go in” to break up the troublesome grain. That’s not true, Woodruff says. There are safer alternatives. Going in a grain bin could cost your life.

“There’s at least five of them that have already had their funeral this year because they thought that they had to go in,” Woodruff says. “We’re having some of the highest death numbers that I’ve seen, and it’s happening much earlier than it’s ever happened before.”

Usually there’s an uptick in engulfment accidents in March and April, but out of condition grain has created dangerous situations since early January this year.

ALTERNATIVES TO ENTERING A GRAIN BIN
While asking for help may not always be a frustrated farmer’s first thought, it’s a small price to pay compared to someone’s priceless life.

Ken Sims is the president of Sims Construction and grain bin dealer near London, Ohio. The dangers of entering a bin with out of condition grain trouble him, too.

“We’ve already had more reports of out of condition grain this year than we typically do by May,” he says. In his 45 years in the business, Sims adds this is the worst year for out of condition grain in recent memory. As a dealer he’s committed to helping farmers unplug and unload their bins without going in.

The dealership has two grain vacs they rent out. “Hopefully we just break even on those. We do that as a service,” Sims explains. “We instruct farmers how to put a hole in the grain bin with a cap so they can use the grain vac.”

Sim’s business has also made several small augers that can be put through the grain bin door, or a hole. They are 6- and 8-inch augers with motors and electrical cords included. By putting the small auger back into the grain, they may be able to get the grain emptied down to a point where someone can safely enter the bin to unplug the center well, Sims explains.

It is not recommended to enter a bin, but if someone does go in, Sims stresses, “make sure there’s someone else there, the farmer wears a lifeline, and that all unloading equipment is locked out before they even get in.”

His dealership keeps a GSI Res-Q-Tube on site in case someone does get trapped in a bin. This fall, Sims plans to host a professional training day to give local fire departments the chance to learn about safely evacuating an entrapped person.

LOOKING AHEAD TO STORING GRAIN IN 2020
There’s concern 2020 may also prove to be a challenging weather year. Before storing the next crop, there are some bin improvements that can help farmers unload out of condition grain more safely.

Clod buster for grain bins from Sims Construction
Photo credit: Sims Construction
Sims Construction offers a pyramid shaped steel guard that is installed over the sumps in a grain bin they call a clod buster. This affordable option is designed to break up clods before they plug center or intermediate wells. They sell for about $165 each, Sims says.

A Big Success for the 20th Edition of the JOSKIN Pro Days!