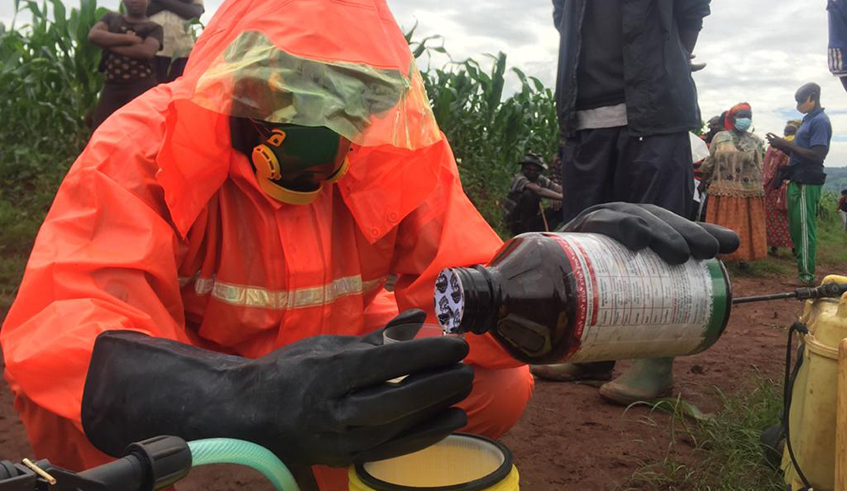 Over the past few weeks, I have been intrigued by two articles I read in this publication, both concerning a topic of my interest –the safety of the solutions we apply to wade off pests, both in our farmlands and in the granaries where we keep our harvest for the rainy days.

One of the articles tackles the unenviable task by government officials regulating our agriculture and health sectors to keep off the Rwanda market banned pesticides that continue to proliferate into the country and end up being used by unsuspecting farmers.

These pesticides were blacklisted after being found to be more hazardous than others authorized under international instruments to which Rwanda is party, including the Rotterdam Convention, a multilateral treaty adopted in 1998 and aims to promote shared responsibilities in relation to importation of hazardous chemicals.

The same can be said of the dangers associated with toxic substances in the chemicals that we use to keep our produce, mainly grains, in storage safe from parasites. These chemicals are periodically applied to ensure the harvest remains intact for a long time, which may end up making them harmful to human health.

Other unintended consequences include a possible ban of these grains on the international market owing to toxic substances, which means loss of income to farmers and by extension loss of valuable export revenue for the country.

Another equally serious challenge is how to dispose off the banned pesticides that are confiscated during these operations.

The concerns about the hazards brought about by the use of pesticides are not unfounded. The World Health Organization (WHO) says acute pesticide or insecticide poisoning affects millions of people globally and accounts for tens of thousands of unintentional deaths each year.

This is not to mention the harm attributable to these chemicals on the flora and fauna in our midst.

In fact, the second article I read from this very publication raises a critical point, which is the harm these pesticides and insecticides that we use to biodiversity.

From the article, beekeepers in the country are crying foul, saying the population of bees in the country has significantly reduced, which has led to the reduction of honey harvested. The reason for this is the chemicals we use in our farms.

It goes without saying that it is not just the bees that are affected but other species as well, including birds and animals; both domestic and those in the wilderness.

Science has also proven that the pesticides we apply on our farmlands may have long term consequences on our soil, which eventually, affects productivity or at worst intoxicates the food grown in that soil, thereby threatening human life.

With land increasingly becoming a scarce resource in our country, we cannot afford any form of risk in that regard.

The other risk is that these pesticides/insecticides have to be applied every planting season or even more than once a season. With such, pests end up growing resistant to them, leaving farmers in further dilemma.

Despite the gloomy picture however, all is not lost.

We basically need to find a way out of using inorganic pesticides – including those that may be authorized – because of these dangers associated with them.

Already, some solutions are being mooted, including growing predatory plants that would keep away the pests among other solutions. How practical this is, I would not know but if you asked me, any solution that falls under Integrated Pest Management (IPM) category is highly recommended.

IPM simply refers to a process you can use to solve pest problems while minimizing risks to people and the environment.

IPM can be used to manage all kinds of pests anywhere–in urban, agricultural, and wildland or natural areas.

Fortunately, we do not have to reinvent the wheel because there are better ways of doing things the clean way, which have been tried and tested, some of which are applicable only once and remain active for a long time.

In my area of expertise which is post-harvest handling with specialty in grains, I have knowledge of different technologies that are effective and safer both for application in agricultural fields and in storage facilities.

These organic solutions which are internationally available in different forms including dust and liquid, are applicable in agricultural fields and on produce for post-harvest storage.

These constitute no chemical element and are all derived from natural source.

The advantages for these solutions include the fact that they are applied once and kills the entire cycle of pests, making them cost-effective and are also harmless to human life in case one has to keep them in a home.

Another notable advantage of this technology is that it is a green solution, safe for the wildlife, plants and water bodies, which bodes well with the country’s aspirations of promoting a green economy.

It is already in use in countries like Canada, the US, Australia, South Korea and Nigeria.

As I conclude, I want to call upon all involved; the policymakers, researchers and all those involved along the agriculture value chain to give serious thought to the notion that we must grow healthy to eat healthy.