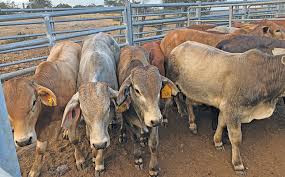 Business partners Soyama Mthongana and Athenkosi Denga, both 26, started farming in Peddie in the Eastern Cape in 2011, but only formalised their business, Lizwe Meat, in 2015.

Growing up in Port Elizabeth, the pair learnt about farming from their fathers and grandfathers, who ran livestock. From the outset, Mthongana and Denga’s goal was to build on the knowledge they had gained from their families, and find innovative ways to farm better at a commercial level.

When starting out on their own, they decided to run farms independently from their families.

Soyama Mthongana (left) and Athenkosi Denga, founders of Lizwe Meat, a cattle production and auction operation based in Peddie in the Eastern Cape.

Setting an example
Denga says that one of the purposes of their business operation is to demonstrate that black South African youth can produce quality beef cattle.

“We can’t leave unchallenged the stigma that farming is for the older generation.”

He adds that a successful livestock business requires substantial financial investment in land, labour and infrastructure, as well investing time and resources to upskill oneself. This is why he and Mthongana took up studies specifically to help them in their business operation.

Between them, they hold degrees in marketing, accounting and business administration. Denga is in the process of completing a master’s degree that researches ways of improving beef sales in South Africa.

The partners’ farming operation is run on leased land.

They have a commercial beef cattle herd consisting of 88 Bonsmara, Brangus and Hereford-type animals.

“The genetic traits of these breeds, such as good feed conversion, are well suited to the environment we farm in. The weaners produced by the herd perform well in the feedlot.

They have three bulls and 85 female animals and produce about 75 weaners a year. From 2015 they decided to farm only one breed, and chose the Bonsmara because of its good performance record in the feedlot industry.

They are still in the process of converting their existing mixed herd to a pure Bonsmara herd by bringing in more Bonsmara bulls.

Over the long term, they also intend acquiring more land to grow their operation further.

“Without this system, the farm will be overgrazed, and it will take a long time to recover,” he says.

They have four camps, and use two for their female animals, keeping between 40 and 45 in each camp. The bulls are kept in the third camp and the fourth is left to rest.

According to Denga, the cattle should be moved on before the grass is grazed down to its roots, as this has a negative effect on regrowth.

Production system
During the breeding season, one bull is taken to each female animal camp and a third is alternated between the two camps, so at times there are two bulls in one camp. The bulls run with the cows/heifers for three months, and calving is in October.

“At the moment, we achieve a conception rate of 90%. However, we’re working on this by improving the genetics of the herd,” says Denga.

They implement a strict culling regime; any cow that fails to produce one calf a year is culled. The calves stay with their dams until they are weaned at seven to eight months.

Their calving rate is about 90% and their weaning rate 95%.

Calves are not weighed at birth, but at weaning; the partners aim for a weaning weight of 210kg, at which point the weaners can be marketed to feedlots.

“To ensure the health of our herd, we maintain constant communication with the provincial agriculture department state veterinarian, Dr Chauke Maluleke, to find out what diseases are prevalent in the area, and we vaccinate and treat animals accordingly,” says Denga.

Feedlots and auctions
In addition to selling weaners directly to feedlots, Mthongana and Denga sell their cattle through auctions, which they organise in partnership with GWK and the National Agricultural Marketing Council (NAMC).

“Auctions are not easily accessible for emerging and communal farmers because of the costs associated with them.

“Transport to and from the auction for individual farmers can be prohibitively high.

“This was the main reason we decided to become involved in auctions, and host them in such a way that they’d become more widely accessible,” Denga says.

They conducted market research about which areas needed access to markets, and started by focusing on an area close to Mthatha in the former Transkei.

According to Denga, the livestock at auctions sells itself as people can see which animals are in good health.

These events also give farmers an opportunity to benchmark themselves against other farmers, and share information on how to improve the quality of their animals.

In addition, auctions create healthy competition between farmers and inspire them to produce better-quality livestock.

Denga adds that some older farmers are not knowledgeable about the South African red meat grading system and the market demand for tender beef from younger animals.

“In our experience, many of the older farmers we deal with don’t understand that this is where the industry is going,” he says.

Denga says he and Mthongana hold most of their auctions close to the end of the year, when the majority of farmers want to sell their cattle to satisfy increased demand. The auctions are hosted in temporary structures set up at different venues in the rural areas.

“We try to meet the farmers who participate halfway by offering them a reasonable rate to assist with transport to and from the auction venues,” says Denga.

Auctions also represent a safer way for farmers to sell their cattle, as all proceeds from sales are transferred electronically, which is more secure than dealing on the informal market, says Denga.

“Agriculture has great potential to contribute to South Africa’s economy. “We believe that farming is where the country’s next generation of millionaires will come from.”

An animal health plan for the year from Dr Faffa Malan