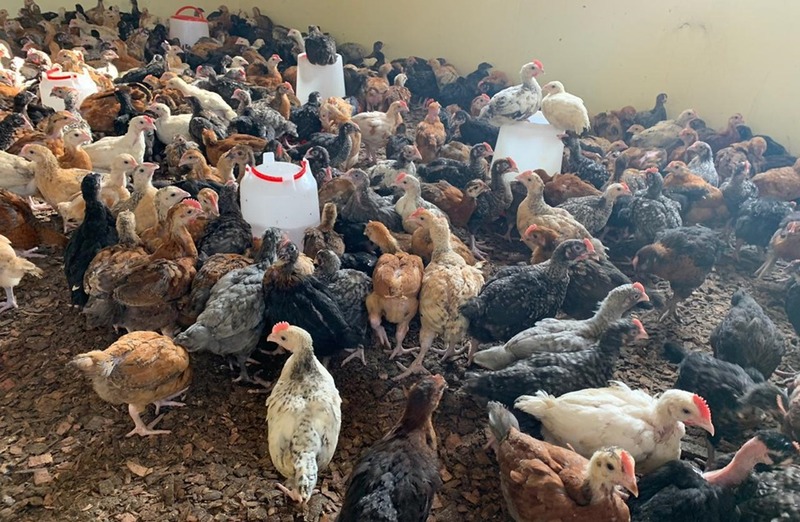 Gold Diogene Rwema, a 29 -year old young entrepreneur from Kirehe district, is making a fortune from poultry and hatchery business which he started in 2018 with two local breeds of chickens and 23 hatched kuroiler eggs after graduating from university.

In 2016, Rwema received his Bachelor’s degree from Institut Catholique de Kabgayi (ICK) thanks to the support from FARG-Genocide Survivors Support and Assistance Fund.

Orphaned by the 1994 Genocide against the Tutsi, Rwema found himself on the street–homeless.

He told Doing Business that after graduating he spent two years researching about poultry farming and pondering where to get investment capital.

“I was thinking of how to get capital to start a big project but I didn’t get such financial capacity because I was jobless. I decided to start poultry farming with my few resources,” he narrated.

“The 23 eggs were hatched by the two chickens from which 21 kuroiler chicks survived- three cocks and 18 hens,” he said.

Kuroiler chickens are breed that are reared for both eggs and meat production.

After six months into business, the young entrepreneur, who founded the company called Diosol Ltd, said he came up with an innovative idea and fabricated his own small incubator and hatching egg machine using learning materials on YouTube channel.

The small machine which he made had the capacity to incubate and hatch 200 eggs to produce chicks in 21 days.

“This small machine has helped a lot to increase production to over 600 kuroiler chickens in the beginning of 2019,” he said

The entrepreneur who recently secured Rwf1.5 million award from Youth Connect Awards in Eastern province at provincial level said he is currently farming over 8,000 chickens of which 5,000 chickens lay eggs every day.

“Besides supplying and selling eggs, in 2020 I bought a big incubating and hatching machine at Rwf7.5 million from China that helps me to produce and sell about 10,000 chicks. The machine has the capacity to incubate 1,200 eggs. This machine has helped a lot in increasing chicks’ production,” he said, adding that the price per a chick ranges between Rwf700 and Rwf1,000 depending on the type.

“We also have an e-commerce platform on www.diosol.rw to be able to expand our market and facilitate clients to know more about our products,” he noted.

Rwema, who said he had not yet used a bank loan, said he is looking to expand his business to Kigali and Northern Province soon.

Rwema said that he was previously using charcoal to warm chickens but after the charcoal prices soared, he started to make briquettes as an alternative fuel from chickens’ faeces.

“The briquettes are eco-friendly because they replace charcoal and they do not emit smoke. Briquettes could save 80 per cent of the trees we cut.

Previously I used to spend seven sacks of charcoal in a period of 14 days to warm chickens with one sack at Rwf9, 000 spending over 60,000. However, currently, the cost I used to incur on charcoal has decreased to only Rwf12, 000 on using briquettes,” he said.

He said he is aspiring to get a big and modern machine to increase briquette production.

As a double benefit, he added, when Caloric energy is exhausted from burnt briquettes while warming chickens, they later become feeds for poultry.

“I also use resources from poultry to feed my 24 pigs,” he said.

The entrepreneur added that he is also producing pesticides and two tonnes of manure to grow vegetables, fruits and other crops on his four-hectare farmland.

“The pesticides I am producing from chicken excreta are environmentally friendly… per agricultural season we harvest and sell French beans worth over Rwf8 million,” he said.

Chicken manure is an excellent source of nutrients of which nitrogen and phosphorus content is at least twice as high as that of other farm manures such as cow manure.

Giving back to society

He said that as an orphan and former street child who has beaten the odds, is also giving back to the community.

“I train people on poultry farming for free,” he said.

The entrepreneur has also launched an initiative to provide chicks for free to every vulnerable child in the community where he operates his business.

“It is a way of eradicating malnutrition and inculcating entrepreneurship and saving culture among the children. I have given Kuroiler chicks to children in two villages,” he said.

The benefits of rearing Kuroiler chicken

Poultry farming has always been an interesting option for small entrepreneurs. It does not require a lot of capital to set up, it is easy to manage and most importantly, its returns are always lucrative.

However, the introduction of the Kuroiler breed of chicken is consistently changing the poultry industry in Africa both at the subsistence and commercial level.

According to East Africa Agribusiness Magazine (ea-agribusiness.com), kuroiler is a genetically improved breed from India, derived from crossing coloured broiler males with Rhode Island Red females and producing both eggs and meat.

This bird breed’s name seems to have been coined from the word BROILER.

Kuroilers grow faster and mature in about 10 weeks compared to local breeds that hat several months.

Kuroiler chicken performs quite well under what experts call “scavenging conditions”. You can feed them on animal or plant remains. Unlike other breeds, you don’t need to spend a lot of money to feed them.

As we all know, indigenous chicken produces tastier meat than modern breeds.

Kuroiler chicken is just like indigenous chicken, their meat is tasty and they lay yellow York eggs.

While indigenous chicken produces about 40 eggs per year, Kuroiler does about 150 eggs in the same period.

The only disadvantage with this breed of chicken, however, is that they don’t incubate and hatch their eggs. As such you would need to purchase an incubator for the job.

To breed kuroiler it is advised that 10 hens are serviced by one cock.