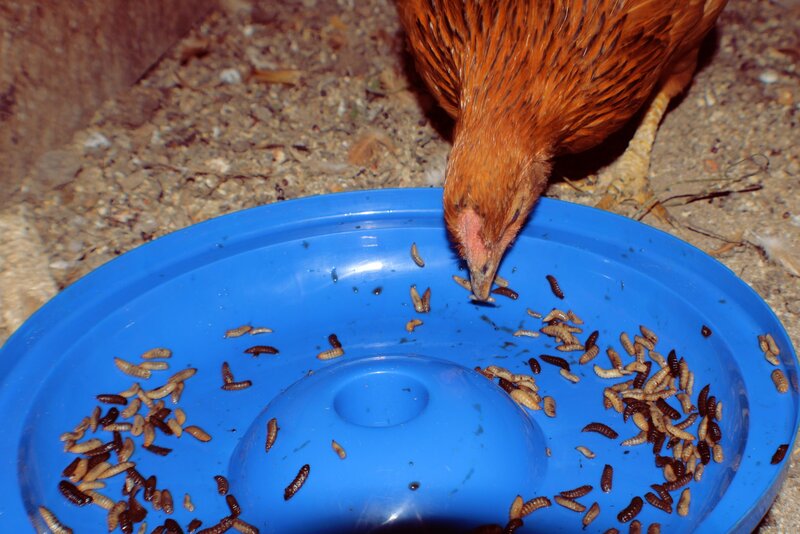 The Rwanda Agriculture and Animal Resources Development Board (NAEB) is working with other actors in the livestock sector on research on the potential use black soldier flies (BSF) for affordable protein-rich animal feed.

Its researchers partnered with Golden Insect Ltd – an insect breeding firm based in Musanze District – and Enabel, the Belgian Development Agency, for this study.

The study started on May 3, 2021, beginning with broiler chickens in RAB’s Muhanga research station, and fish in the Kigembe [national aquaculture station] located in Gisagara District, and it is ongoing as scientists plan to extend it to layer chickens and pigs.

According to RAB, the black soldier flies have 70 percent proteins needed in the feed for chickens, pigs and fish.

This fact, RAB said, implies that such flies can provide an alternative and cheaper source of protein to replace soymeal or fishmeal needed in the production of livestock feed, and could help stockbreeders to access affordable feed in Rwanda.

Expense on feed accounts for the biggest part (60-70 percent) of the livestock production cost in the country. Currently, a kilogramme of chicken feed is around Rwf400, which is expensive for poultry farmers.

Fabrice Ndayisenga, Head of Animal Resource Research and Technology Transfer Department at RAB told The New Times that the black soldier flies are promising in helping to reduce the high cost of protein-rich feed, and improve livestock productivity.

“The move could help reduce the bill on expensive imported items [such as soya beans]… Countrywide, feed factories need to import about 45,000 tonnes of soybeans per year,” he said, adding that getting the alternative protein source from black soldier flies in the country would be a relief.

How black soldier flies are used for animal feed

A black soldier fly (BSF), with scientific name Hermetia illucens, is a shiny looking fly that might be confused with a wasp.

The species is said to have originated from South America, but it is nowadays present worldwide. Its name comes from the black colour of the adult flies, with grayish wings held over their backs when reposing.

Black soldier flies oviposit (lay eggs) – a female can lay around 500 eggs – which develop into larvae or maggots.

These larvae eat organic waste and convert it into protein for animal consumption.

Remy Titien Niyireba, assistant research fellow at RAB told The New Times the larvae are dried using a drying machine at 55 degrees for between 5-7 minutes.

He added that they are ground into flour that can be safely kept for long, which is mixed with other needed ingredients to make nutritious feed for chicken, fish and pigs based on their growth stage, nutrient needs and recommended recipe for better results.

To get plenty of protein, he said that it requires to rear many of them for mass production of their larvae, organic waste including that from market, kitchen and breweries. He explained that five tonnes of organic waste can generate one tonne of BSF larvae.

Niyireba said that RAB’s Muhanga Station started rearing the black soldier flies, adding that there are also firms that are rearing them including Golden Insect Ltd based in Musanze, and two companies operating in the districts of Kamonyi and Bugesera.

Before the development, he said that they used to be imported from Kenya.

Currently, Niyireba said that a kilogramme of fresh BSF larvae costs Rwf500, while that of soybeans is Rwf1,500.

He said that they are inexpensive and take short time to obtain, normally not more than 20 days, compared to growing soya which takes months to harvest.

“Most of the soybeans used in the country are imported at up to three times the current price of fresh BSF larvae as a kilogramme of soya beans is Rwf1,500,” he said.

However, for the dried larvae, he said that a kilogramme is Rwf1,500, explaining that it is obtained from drying three kilogrammes of the fresh ones.

“You use a relatively small amount of BSF larvae flour to make blended nutritious feed thanks to its rich nutrient concentration, with a kilogramme replacing five kilogrammes of soya,” he said.

Dominique-Savio Imbabazi, an insect breeder and founder of Golden Insect Ltd told The New Times that mass production of BSF maggots requires smaller area than soya to produce the same amount of protein.

He said that soya beans have protein ranging from 25 to 30 percent, while BSF maggots have a higher protein level of 70 percent.

In addition, he said that there is competition between humans and livestock on soybean consumption, which can contribute to high cost of this legume.

The cost of fresh BSF maggots should not exceed Rwf500, and the dried ones Rwf1,500 a kilogramme, according to Imbabazi.

However, he warned that the labour-intense activity to sort the mixed waste, and the high cost of electricity needed to dry the maggots, were among factors contributing to increasing their prices to Rwf1,000 and Rwf2,500 respectively.

“But, the costs are still relatively affordable for the farmer as when they buy a kilogramme of dried BSF maggots at Rwf2,500 and mix feed ingredients based on RAB recommendation, it reduces their expense on feed by 50 percent compared to using soya beans and fishmeal,” he said.

It is to note that, in the region, black soldier flies are also used for livestock feed in Kenya and Uganda.

How to make molasses for your livestock