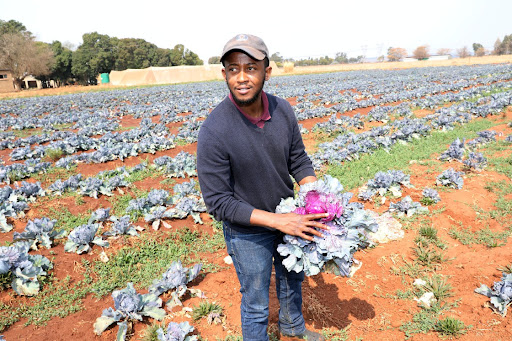 Tebogo Sebambo is part of a growing cohort of emerging farmers who have joined an online platform to share their produce with the needy to fight hunger and poverty.

Sebambo, 36, the owner of At Source Food Serve – a smallholding farm in Magaliesberg – grows vegetables such as cabbage, sugar snap peas, carrots and beetroot.

With the devastating effects of the Covid-19 pandemic and the introduction of a hard lockdown, Sebambo battled to sell his produce and was left with excess supply. He donated one-and-a-half tons of cabbages to needy people about Gauteng and the North West.

“People were scared, industry ground to a halt and exports markets were closed and retailers were not placing orders. Meanwhile, we were sitting here with the product in the ground and ready to go. As I was chatting with one of the farmers he told me about Food Forward SA, which has a link to OneFarm Share, an online platform that connects farmers to feeding schemes across the country,” he said.

Sebambo said this was a good idea for him as he believed in helping those who are less fortunate.

“OneFarm Share matches requests for food relief to smallholders, emerging farmers and food processors with excess fresh produce and provides a reliable, trusted channel for them to donate their surplus food to help overcome hunger and poverty,” he said.

“The platform allows corporate donors and the public to help too. We have all been in the position where we needed help. We did not get out of our situations without being helped and I believe that you give help when you help other people.”

He said someone in logistics helped to collect produce from other farmers in Gauteng to deliver to OneFarm Share.

Sebambo, who grew up in Rockville, Soweto, said farming was not part of his plans.

“Before farming I used to work as a marketing manager as I had obtained a BCom marketing degree with the University of Pretoria. However, farming came to me after seeing the price of food and the scarcity of indigenous vegetables at retail stores, which  made me change my mind,” he said.

Sebambo said through networking, researching and many practical mistakes, he started farming in 2012 with the aim to commercialise indigenous vegetables.

“At the time I had managed to raise capital by cashing in a portion of my retirement plan and selling my car. I then left Johannesburg for Krugersdorp for cheaper rental and better access to land. I started renting this farm before it was handed over to me in 2016. There was nothing much as the paint in the house was peeling off and I also had to buy storage fridges,” he said.

Sebambo said over the years his farm had grown and he employed 15 people.

“However, as the result of the lockdown I am only left with four employees. This is because restaurants and the hospitality sector were subdued due to restrictions. We have also seen the price of fuel, steel and fertiliser increasing.

“We have managed to export baby carrots, cabbages and fine beans to the UK, China and sometimes Mauritius. We hope to continue exporting in the coming summer.”

OneFarm Share is an initiative by Standard Bank in partnership with HelloChoice, a local agri-tech company with a digital fresh produce marketplace. Since launching in November last year, the OneFarm Share platform has delivered over 2,200 tonnes of fresh produce, which translates to eight million meals for more than 700,000 people in SA.

CEO of Standard Bank SA, Lungisa Fuzile, said: “The beauty of OneFarm Share is that it is addressing the critical issues of food wastage, hunger and malnutrition while enabling new markets for farmers.”

Education would encourage youth into agriculture