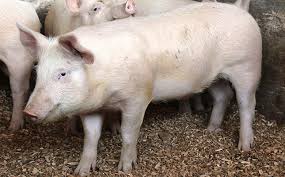 Minister of Agriculture, Land Reform and Rural Development and Fisheries Thoko Didiza announced on Saturday that an African Swine Fever outbreak has been detected in the Eastern Cape Province for the first time.

The minister said the outbreak was detected after the department’s veterinary services conducted livestock post-mortem investigations in Amathole District Municipality in April.

The new outbreak comes months after the department had to announce a government ban on the public auction of hoofed livestock to prevent a spread of foot and mouth in December.

Didiza said the department has sent a notification to the World Health Organisation for Animal Health after the post-mortem investigations found African Swine Fever.

“Control measures currently in place include that all infected pigs should be as far as possible from those that are not and must be housed alone to avoid contact with other pigs in the area to limit the spread of the disease,” said Didiza.

Didiza said the outbreak occurred in a communal environment, which makes movement control and biosecurity between the respective pig herds difficult.

The minister said if pigs from unaffected commercial pig farms in the area are moved to the abattoir for slaughter, they must be accompanied by health attestations to declare that the herds of origin have not shown any signs indicative of ASF or had higher than normal pig deaths.

She urged farmers and livestock owners to keep their pigs enclosed and only by pigs from a reliable source.

Agriculture Forestry and Fisheries spokesperson Reggie Ngcobo said the department has requested police to ensure no movement of pigs between piggeries and no unnecessary contact between pigs and people.

The World Health Organisation for Animal Health has conducted ongoing work to improve the surveillance, tracking and testing of animals for diseases including African Swine Fever.

In its animal disease surveillance report for 2019, OEI said it developed a method for estimating slippage of quarantine materials potentially contaminated with African Swine Fever virus through the air passenger baggage pathway.

“In the course of development, we found that shared data sources make the approach extensible to plant protection quarantine applications, creating the potential for an animal and plant health inspection service wide standard methodology,” the report said.

Over 15,000 Farmers Approved for COVID-19 Fund in South Africa