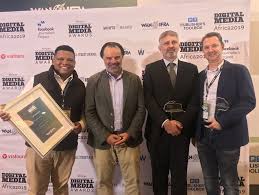 With a record readership approaching a million users, news startup Food For Mzansi has cemented its position as South Africa’s leading digital agricultural and lifestyle publication in just 18 months since its inception.
The publication, started by award-winning journalists Ivor Price and Kobus Louwrens, has made more than 14 million impressions on social media since its launch and has also since won three major international awards. Wan-Ifra, the global organisation for the world’s press, announced Food For Mzansi as Africa’s Best Digital News Startup and the runners-up in Best Social Media Engagement in the African Digital Media Awards last year. In September this year, Food For Mzansi will compete on a global stage during the 72nd World News Media Congress in Zaragoza, Spain.

Also, in March this year, Food For Mzansi was hand-picked as just one of two South African media organisations selected for the Google News Initiative’s first innovation challenge in Africa, Turkey and the Middle East.

“Covid-19 has definitely been a game-changer for us,” says Price, who is also the publication’s editor-in-chief. “We have always been astonished by the high levels of engagement on the website and all our social media platforms but, during the pandemic, we’ve seen a major growth spike. There has certainly been a huge reader interest in reliable information on the impact of the coronavirus on the agricultural sector, but also in the stories of hope that have become our trademark.”

Louwrens believes that Food For Mzansi’s focus on a mass audience also sets it apart from other media role players in the agricultural space. “Our readers tell us that the Food For Mzansi brand has become a bit of a movement. We champion agriculture’s countless unsung heroes and, in many ways, especially small-scale farmers have adopted us. The fact that we started out as a digital-first brand with a number of collaborative touchpoints – some real-world, others virtual – also gave us wings.”

Price adds that #TeamFoodForMzansi has embraced a digital-first mindset. “We unashamedly have a digital-first attitude, and we’re immensely honoured to drive positive change through our work in partnership with top agricultural role players, including the VKB Group, a leading agricultural enterprise.”

In the wake of the pandemic, Food For Mzansi also hosted a historic webinar called ‘We shall overcome: South African agriculture beyond Covid-19’ in partnership with Grobank. A record number of nearly 1,400 attendees joined the webinar from across South Africa and other parts of the world.

Louwrens says: “We started Farmer’s Inside Track as a club for Mzansi’s up-and-coming farmers and new entrants into farming and agri-businesses who started reaching out to us, desperate for information and inspiration to help them startup and get up to sprinting speed as commercial producers and/or agri-processors. The club is still in its early days, but it is already proving to be a resource that can help farmers through that tricky phase of their businesses that comes between the starter pistol and finding their stride in the sprint towards the finish line.”

Food For Mzansi editor Dawn Noemdoe describes a ‘heart-centred approach’ as the brand’s secret ingredient. “Many people say we’re naïve to believe in agriculture’s power to create social cohesion in this broken, beautiful country of ours. But despite all the doom and gloom, not a day goes by where my team and I aren’t inspired by the work of our agriculturists. Just this week we told the stories of the 72-year-old Vuyo Tsika, a blind gardener, and Nomonde Kweza (52), who feeds people through eight different vegetable gardens. We often find hope and inspiration off the beaten track.”

Many leading agriculturists have congratulated Food For Mzansi on its success in the agri-news space. VKB managing director Koos van Rensburg says the agricultural giant is proud of its association with Food For Mzansi, noting that “we share the same value system” coupled with a passion for agriculture and shared love for the land.

“VKB and Food For Mzansi believe in sharing the positive agriculture message amongst the diverse population in contrast to some news that just flourishes on sensation rather than good stories. Food For Mzansi carries an objective message in an unbiased manner to the diverse nation,” Van Rensburg adds.

Free State farmer Nick Serfontein, the chairperson of the Sernick Group, says he feels privileged to have been on the journey with Food For Mzansi since its early days. “It is quite unique in its offering as it is not only for farmers but actually for the end consumer. It connects the farmer (producer) with the consumer. Building this relationship is key to a healthy agricultural sector.” Serfontein also commends Food For Mzansi for its news credibility, noting that the articles are well-researched and “conducive to a united agricultural sector”.

Agri SA deputy executive director Christo van der Rheede echoes this statement, describing Food For Mzansi as a very exciting news platform, which is “perfectly aligned with the national vision to become an inclusive, non-racially biased agricultural sector. I have to commend Food For Mzansi for including so many young people in the positive stories they share daily.”

Why Covid-19 is likely to wreak havoc on African agriculture

How Nigeria Can Achieve Sufficiency In Food Production