Rahma Agasaro, a young Rwandan farmer is passionate about agriculture especially watermelon farming. Despite being discouraged that she couldn’t make it in the agriculture sector as a woman it didn’t stop her from following her passion.

She is an agriculture entrepreneur cultivating watermelon in Ndera, Gasabo district.

Though she majored in marketing in Nairobi, Kenya, hanging around Kenyan farmers brought about the idea and inspired her to do agriculture. The fact that the government of Rwanda offers opportunities and empowers women to be in the sector of agriculture also encouraged her to do farming as she soon realised her passion was agriculture.

She revealed that it was easier to do agriculture, especially cultivating fruits because it is easier for her to understand the process and that there are very few people who cultivate watermelon in Rwanda specifically. 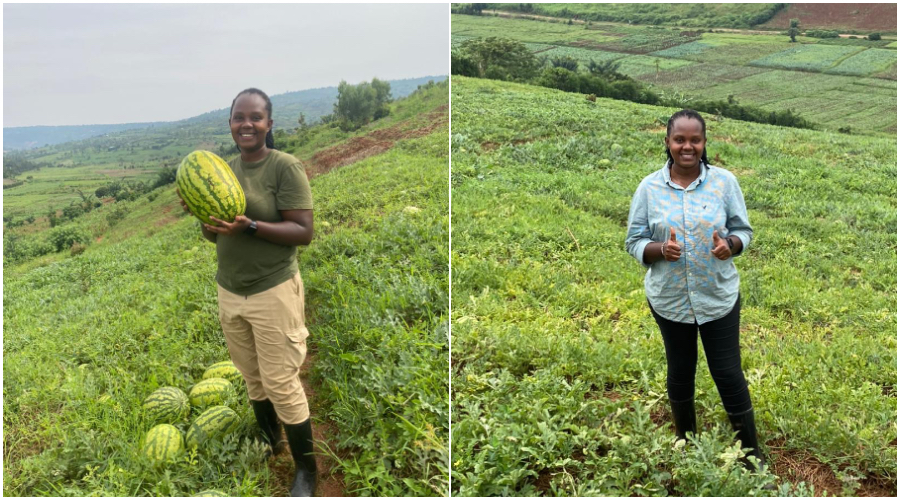 In November last year Agasaro came up with the idea of growing watermelon.  She grabbed the opportunity because it is not a popular crop on the market, and according to the studies, it is fairly easier to cultivate compared to other cash crops.

She revealed that agriculture is a sector that plays a big role to support the economy and that the Government offers support to women in agriculture.

The 25-years-old notes that she didn’t struggle getting buyers even despite having just got started. For instance, she mentioned that she has over five potential buyers who are interested in buying her watermelons.

Challenges along the way

The young entrepreneur explained that the most challenging thing she faced was the stereotypes in agriculture where she was being discouraged by people just basing on the fact that she is a girl. People kept telling her how impossible it was for her to make it in the agriculture sector as a woman.

Secondly, she mentioned that heavy rains had an effect on the seeds and price fluctuation problem because most fruits are imported from Tanzania and it hinders the market in Rwanda.

She also added that she was challenged by financial assistance when she started agriculture because it was hard to convince investors at first.

Agasaro employs around 20 permanent workers who live nearby the field which she says helps to support them in their daily needs.

She explained that in years to come she sees herself among big farmers in the country and East Africa region because she plans to not only do farming but also take part in supplying the watermelon value chain.

JOSKIN POLSKA Galvanising Plant: the Event of the Decade